Our performance consistency test explores the extent to which a drive can reliably sustain performance during a long-duration random write test. Specifications for consumer drives typically list peak performance numbers only attainable in ideal conditions. The performance in a worst-case scenario can be drastically different as over the course of a long test drives can run out of spare area, have to start performing garbage collection, and sometimes even reach power or thermal limits.

In addition to an overall decline in performance, a long test can show patterns in how performance varies on shorter timescales. Some drives will exhibit very little variance in performance from second to second, while others will show massive drops in performance during each garbage collection cycle but otherwise maintain good performance, and others show constantly wide variance. If a drive periodically slows to hard drive levels of performance, it may feel slow to use even if its overall average performance is very high.

To maximally stress the drive's controller and force it to perform garbage collection and wear leveling, this test conducts 4kB random writes with a queue depth of 32. The drive is filled before the start of the test, and the test duration is one hour. Any spare area will be exhausted early in the test and by the end of the hour even the largest drives with the most overprovisioning will have reached a steady state. We use the last 400 seconds of the test to score the drive both on steady-state average writes per second and on its performance divided by the standard deviation. 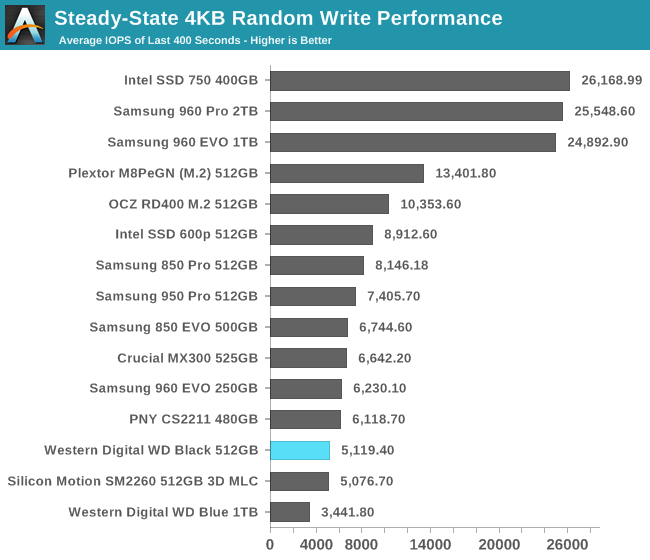 The WD Black has a respectable steady-state random write speed for a drive with planar TLC NAND, but the drives with 3D TLC are all faster. The Plextor M8Pe using the same controller but MLC is more than twice as fast. The SATA-based WD Blue that uses the same NAND is substantially slower despite having twice the capacity. 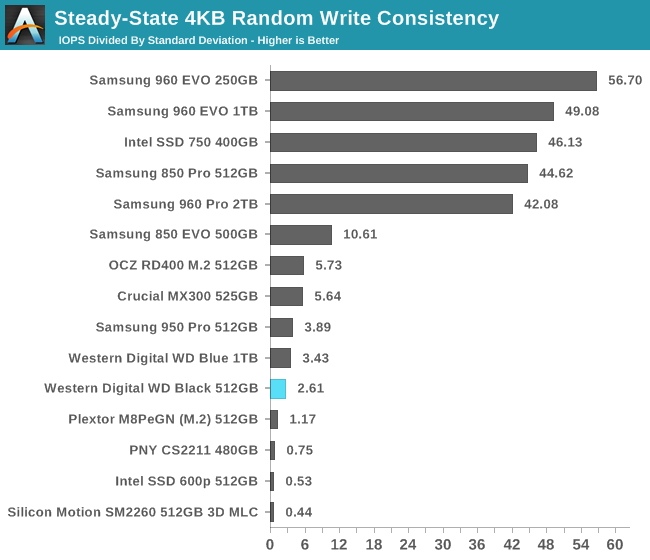 The WD Black's consistency score isn't in the gutter and is actually more than twice the Plextor M8Pe's score, but it's still far below the scores of the drives that are both fast and steady.

The WD Black runs out of spare area about four minutes into the test and abruptly transitions to its steady state. The performance consistency gets gradually worse over the course of the test but the average stays the same. With extra overprovisioning, the WD Black hovers around 33k IOPS with good consistency before transitioning to steady state.

By the end of the test, the WD Black's steady state performance is varying from just under 1k IOPS to just over 10k IOPS. With extra overprovisioning, the WD Black is mostly staying between 10k and 30k IOPS.