Due to its plastic body and understated design, an untrained eye can easily mistake the G.Skill KM570 MX for a typical <$30 office keyboard. In fact, visually it is not much different than the membrane-based Zalman K650WP $30 keyboard that we reviewed last year, with even the company logo printed at the same spot. A closer look however reveals that the KM570 MX has actual mechanical switches and that the plastic body of the keyboard hides the steel frame beneath the keycaps.

We received the US layout version of the G.Skill KM570 MX. It is a 108 keys keyboard that is compatible with the 104 keys ANSI layout, with four extra keys added to support extra functions. It has a 6.25× Spacebar and seven 1.25× bottom row keys. The company logo is etched on the Spacebar key. G.Skill took the classic approach with the keycap character etching and the secondary characters remain at the bottom half of the keycap where, as we will see later on, the light from the LEDs does not reach them. 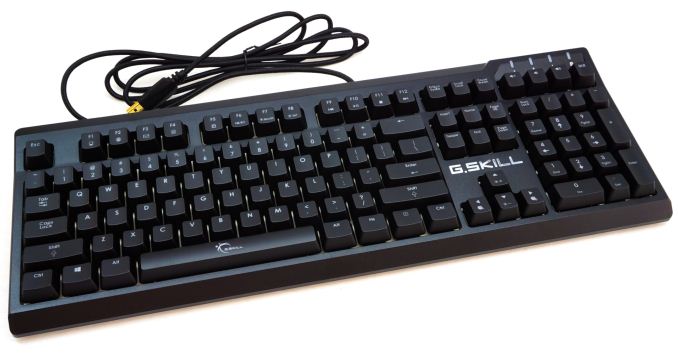 Despite its classic design, the G.Skill KM570 MX has some support for advanced functions. Many of these are available via Fn keystroke combinations, with said Fn key replacing the right Windows key. Used in combination with the Fn key, the F1-F4 keys launch basic OS applications, F5 toggles on and off “game mode”, which disables the Windows key, F6 toggles between 6 and n key rollover, and F9-F12 perform basic media playback actions. Three out of the four additional keys above the numpad offer direct sound volume controls, with the fourth key being the Macro Recording (MR) key. The MR key initiates the on-the-fly recording of keystroke macros and allows them to be stored into any key, replacing its original function.

The lighting effects of the keyboard are also controllable via keystroke combinations that include the Fn key. In that scenario, F7 changes the pre-programmed lighting effects, F8 allows for the programming of a basic custom profile that will illuminate only the keys specified by the user, and the arrow keys adjust the lighting effect speed and brightness. 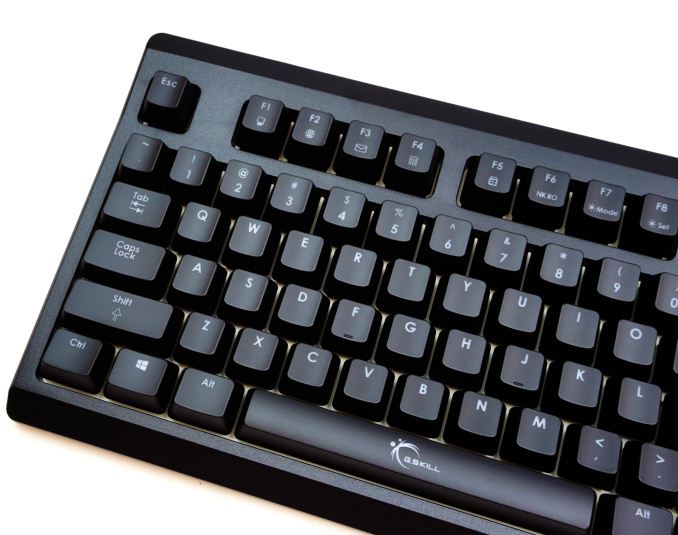 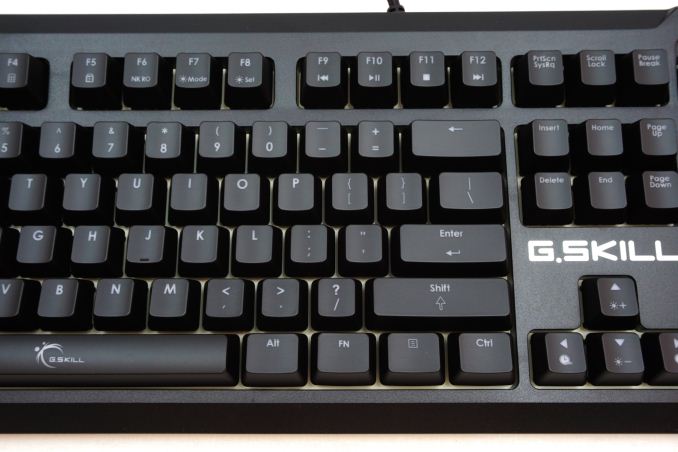 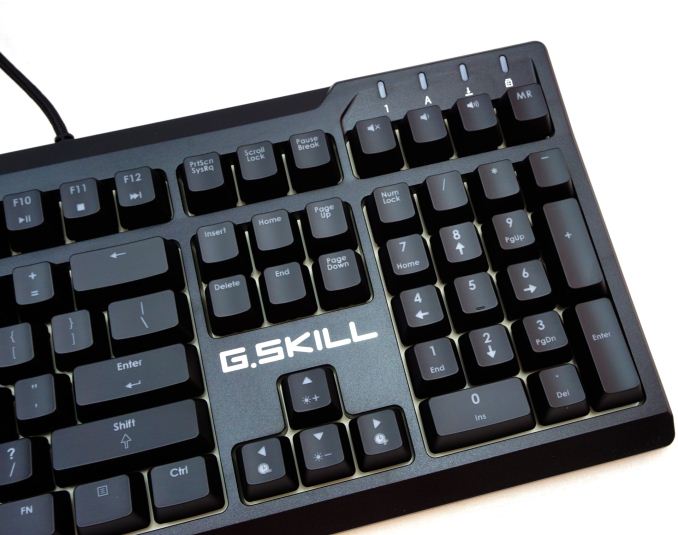 Although it might be hard to tell from the pictures, the G.Skill KM570 MX is a rather tall keyboard. The tilt adjustment feet are tiny and hardly lift the backside of the keyboard, which is already high enough for comfortable typing even without unfolding them. It has a contoured design that should allow the fingers to comfortable reach each and every key.

As we mentioned above, the G.Skill KM570 KX has two tiny rear feet that barely lift the already very tall keyboard. It has five small anti-skid rubber pads attached, two very small round ones at the top corners and three longer ones across the lower side of the keyboard’s bottom. 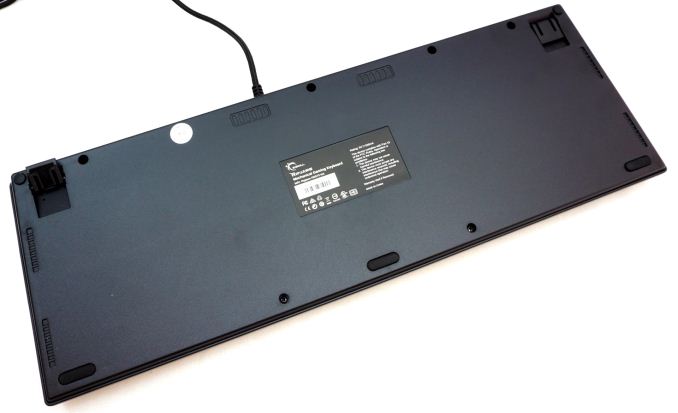 The removal of a few keycaps revealed a milky white steel plate and genuine Cherry MX switches. G.Skill produces the KM570 MX with either Red, Blue, Brown, or Silver (Speed) switches. Our version came with the Cherry MX Brown switches, which are relatively soft and provide quiet, tactile feedback. The keyboard is using Cherry’s cross-type supports beneath the larger keys and the Spacebar key. 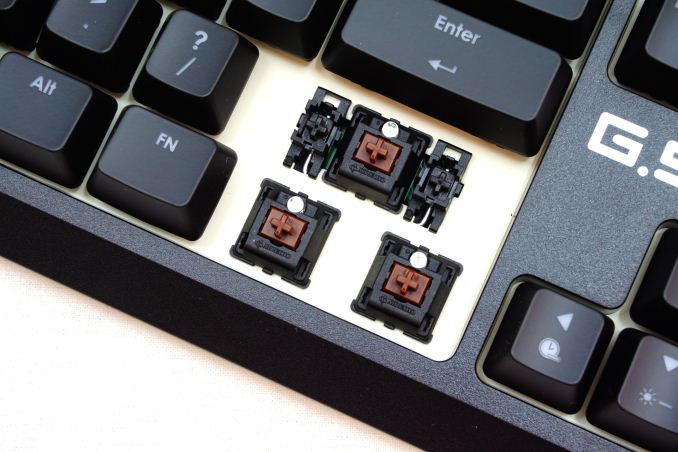 Even though there's only a single LED per switch, the white backplate of the KM570 MX creates a very nice, even visual effect. Our KM570 MX features only red LEDs, and that is one of the two main differences between it and the more advanced KM570 RGB. The keycap design however leaves the secondary/bottom character unevenly illuminated, which is a significant aesthetic dissonance, especially when it comes to the company’s logo on the Spacebar key. 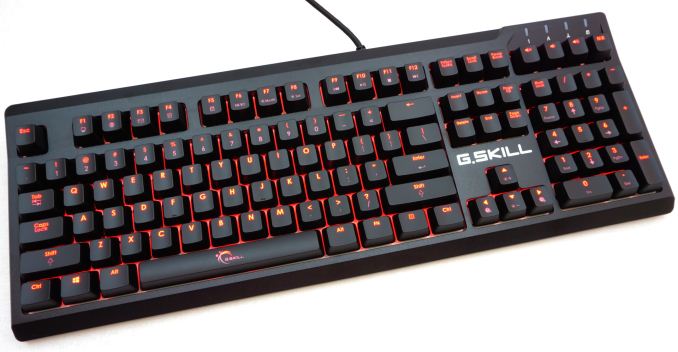 The heart of the G.Skill KM570 MX is a modern NXP LPC11U35F USB 2.0 microcontroller. It is not a powerhouse but it is a fairly good chip, sporting a Cortex-M0 50 MHz CPU and 64 kB of on-chip flash memory. Considering that the KM570 MX is a straightforward product that doesn't include advanced macros, software programming, or hardware/software profiling, this controller is more than sufficient. 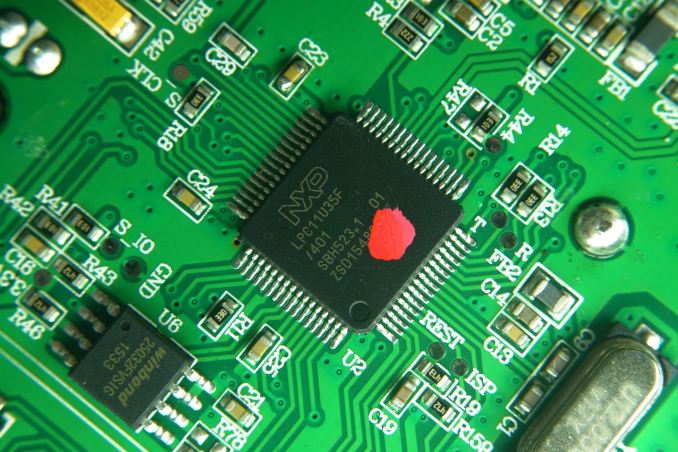