The Habey BIS-6862-I3 and the Shuttle DS77U were evaluated using our standard test suite for low power desktops / industrial PCs. Not all benchmarks were processed on all the machines due to updates in our testing procedures. Therefore, the list of PCs in each graph might not be the same. In the first section, we will be looking at SYSmark 2014 SE, as well as some of the Futuremark benchmarks.

BAPCo's SYSmark 2014 SE is an application-based benchmark that uses real-world applications to replay usage patterns of business users in the areas of office productivity, media creation and data/financial analysis. In addition, it also addresses the responsiveness aspect which deals with user experience as related to application and file launches, multi-tasking etc. Scores are meant to be compared against a reference desktop (the SYSmark 2014 SE calibration system in the graphs below). While the SYSmark 2014 benchmark used a Haswell-based desktop configuration, the SYSmark 2014 SE makes the move to a Lenovo ThinkCenter M800 (Intel Core i3-6100, 4GB RAM and a 256GB SATA SSD). The calibration system scores 1000 in each of the scenarios. A score of, say, 2000, would imply that the system under test is twice as fast as the reference system. 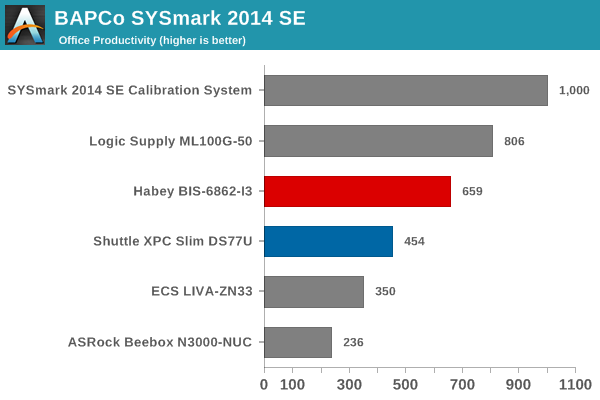 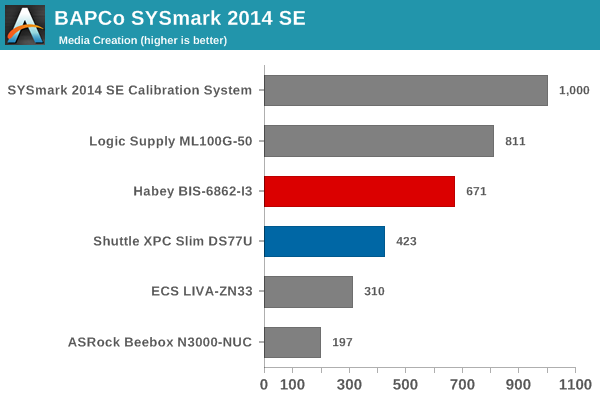 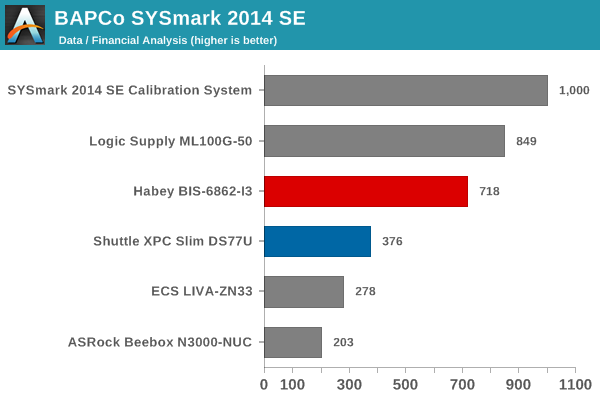 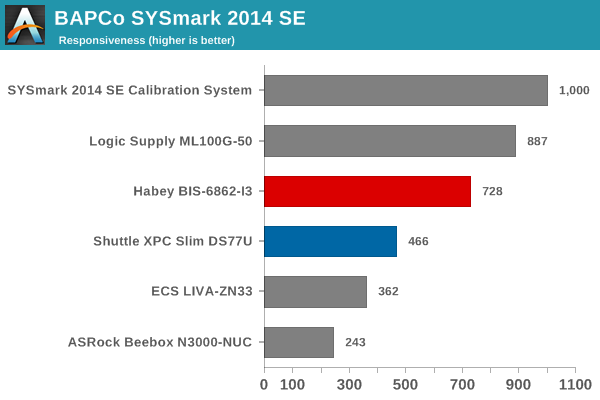 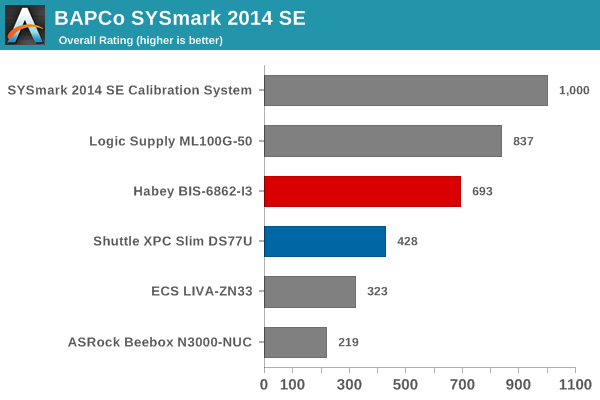 SYSmark 2014 SE also adds energy measurement to the mix. A high score in the SYSmark benchmarks might be nice to have, but, potential customers also need to determine the balance between power consumption and the efficiency of the system. For example, in the average office scenario, it might not be worth purchasing a noisy and power-hungry PC just because it ends up with a 2000 score in the SYSmark 2014 SE benchmarks. In order to provide a balanced perspective, SYSmark 2014 SE also allows vendors and decision makers to track the energy consumption during each workload. In the graphs below, we find the total energy consumed by the PC under test for a single iteration of each SYSmark 2014 SE workload and how it compares against the calibration systems.

The Core i3-equipped Habey BIS-6862-I3, with its hyperthreading feature (2C/4T), scores better than the dual-core Celeron equipped Shuttle DS77U, as expected. The DS77U is better than the Atom-class fanless PCs (despite being much closer in cost to them). The surprising segment of the results is the fact that the Habey unit is more energy-efficient compared to the Shuttle PC for all the evaluated SYSmark 2014 SE workloads. The Skylake-based Logic Supply ML100G-50 leads the performance charts above, but, is not as energy efficient as the Kaby Lake systems. One of the important caveats here is that SYSmark 2014 SE consistently errored out when the benchmark was run on the DS77U with its original single SODIMM 4GB configuration. The scores presented above for the DS77U are with a 1x 16GB DDR4-2133 SODIMM (all other benchmark numbers for the DS77U in this article are with the 1x 4GB SODIMM put in place by Shuttle).

We continue to present PCMark 8 benchmark results (as those have more comparison points) while our PCMark 10 scores database for systems grows in size. PCMark 8 provides various usage scenarios (home, creative and work) and offers ways to benchmark both baseline (CPU-only) as well as OpenCL accelerated (CPU + GPU) performance. We benchmarked select PCs for the OpenCL accelerated performance in all three usage scenarios. These scores are heavily influenced by the CPU in the system. The Broadwell and Skylake-based Core i5 ML100G units from Logic Supply outperform the Habey and Shuttle systems, as expected. When graphics benchmarks enter the picture, the Intel HD Graphics 620 in the Habey unit manages to edge past the integrated GPU in the Broadwell-based Logic Supply ML100G-30. 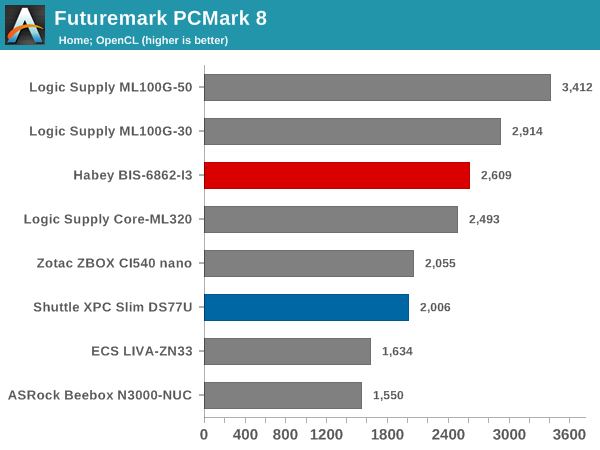 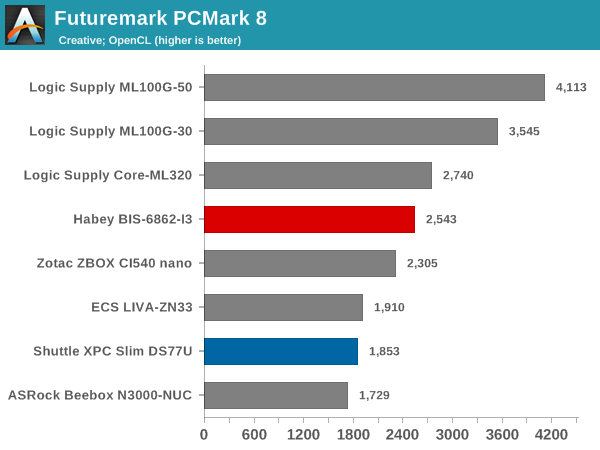 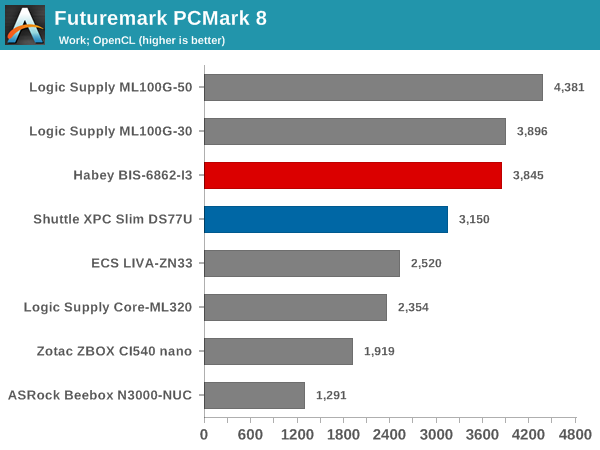 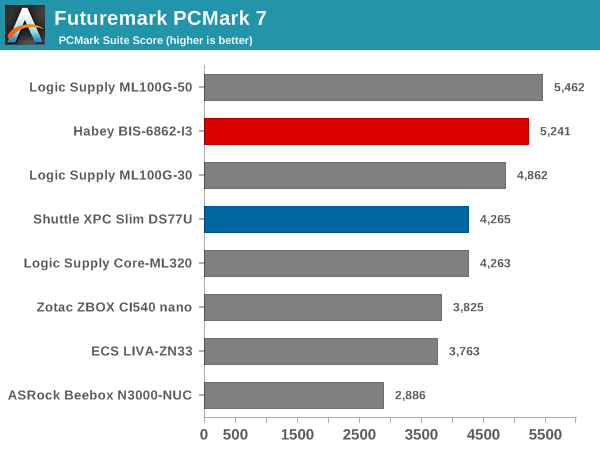 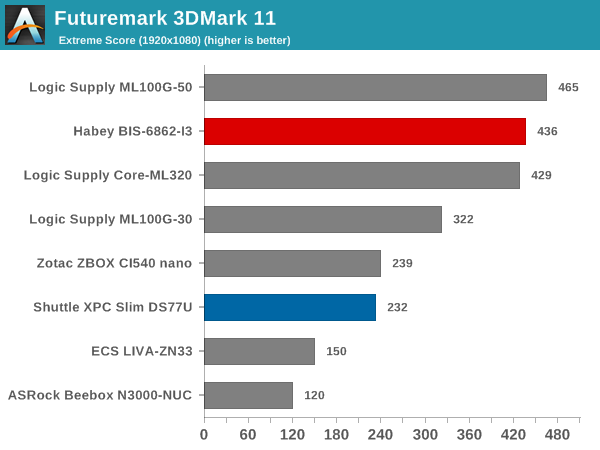 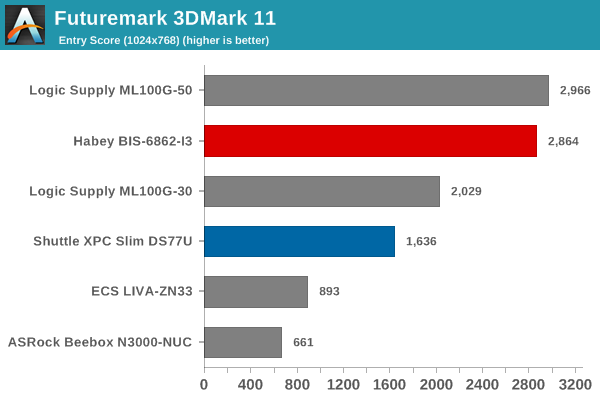 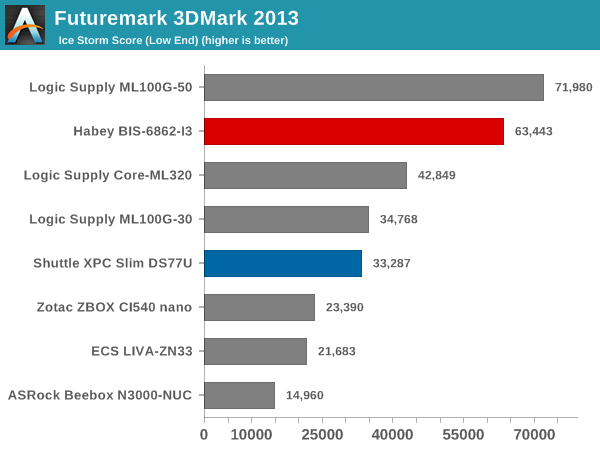 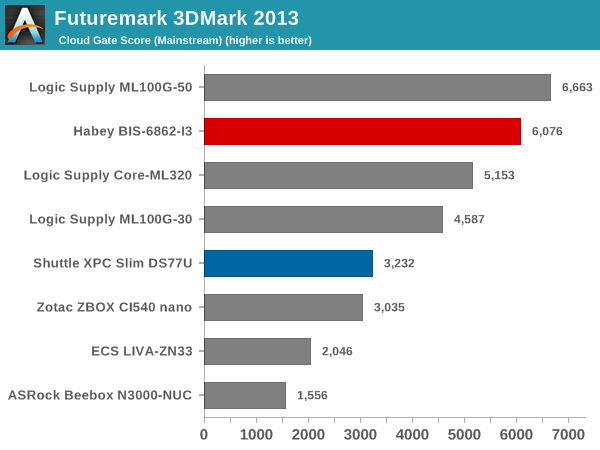 We have moved on from R11.5 to R15 for 3D rendering evaluation. CINEBENCH R15 provides three benchmark modes - OpenGL, single threaded and multi-threaded. Evaluation of select PCs in all three modes provided us the following results. The OpenGL results for the Habey unit are very encouraging, though the pure CPU-based numbers are still not as good as those obtained with the Broadwell and Skylake Core i5-based units. 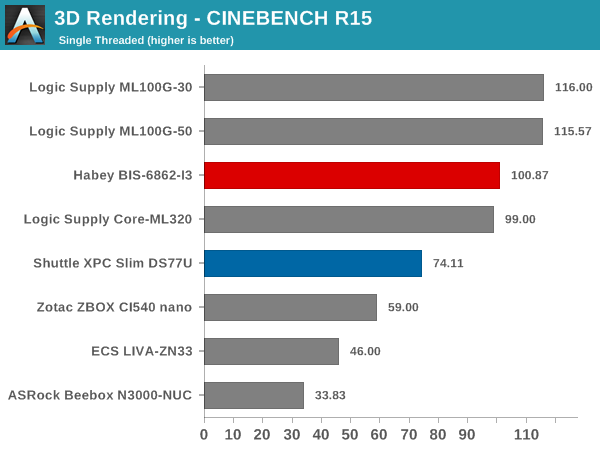 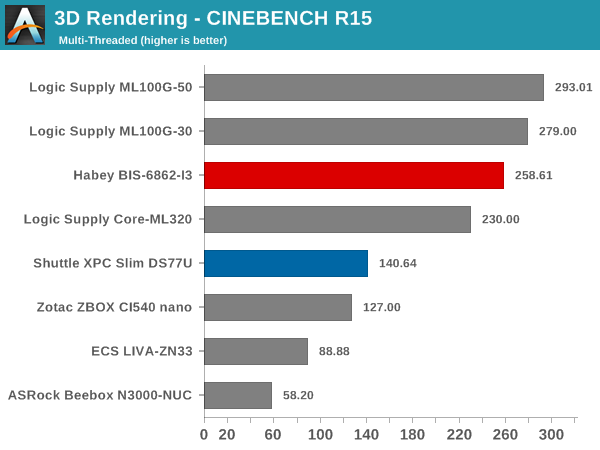 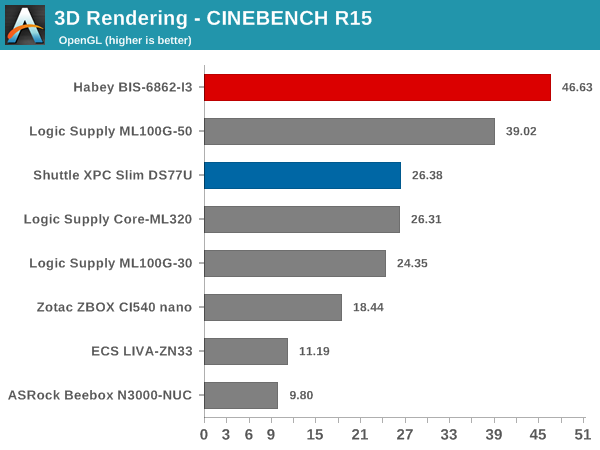