When ASUS rebranded its TUF series back in 2017 to supplement its already large gaming range of motherboards, it changed the aesthetic. Over the years, the TUF Gaming series has changed to what we have today with a slightly more subtle design for Z590 over previous generations. Looking at the PCB, ASUS is using a black and grey accented patterned design, with black heatsinks throughout, including a contrasting black chipset heatsink with the ASUS TUF logo embossed onto it. ASUS does include integrated RGB LEDs, but they glow from the right-hand side of the board. It does include two AURA addressable and two AURA RGB headers for users to add more if they so wish.

ASUS also includes ample cooling capabilities with the TUF Gaming Z590-Plus WIFI, including six 4-pin headers in total. This includes one for a CPU fan, one for an optional CPU fan, one for an AIO pump, and three for chassis fans. Other notable headers include a Thunderbolt header (for users to install an add-in-card, purchased separately), a clear CMOS header and a COM port. 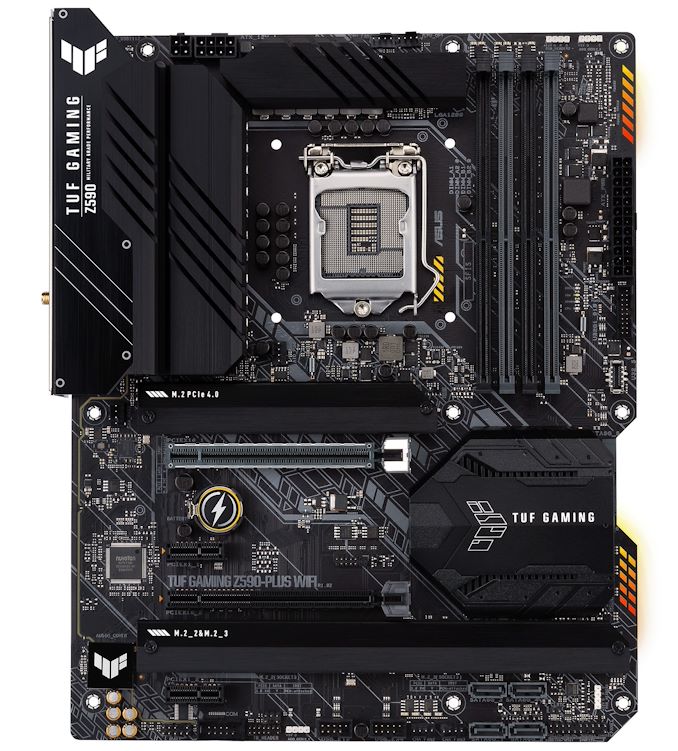 The ASUS TUF Gaming Z590-Plus WIFI includes one full-length PCIe 4.0 x16 slot, with a second full-length PCIe 3.0 x4 slot, and two PCIe 3.0 x1 slots. Touching more on storage options, ASUS includes three M.2 slots onboard, including one with support for PCIe 4.0 x4 M.2 drives, and two with support for PCIe 3.0 x4 and SATA M.2 drives. For SATA, there are six ports in total, with two right-angled connectors nestled into the cutout on the PCB on the right, and the remaining four with straight angled connectors in the bottom right-hand corner. 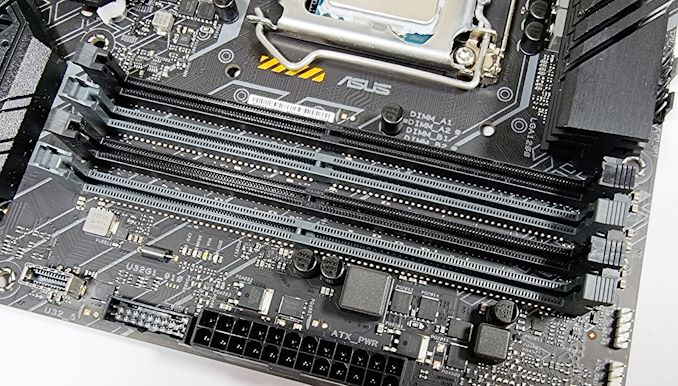 In the top right-hand corner is the board's memory slots, which includes four slots with support for up to DDR4-5133 when using Rocket Lake. Support is slightly different when using Comet Lake, which ASUS lists as DDR4-3200, but it shouldn't be a problem running DDR4-4000+ with Intel's 10th gen. Users can install up to 128 GB across the four slots, and memory will operate in dual channel with 2/4 sticks installed. 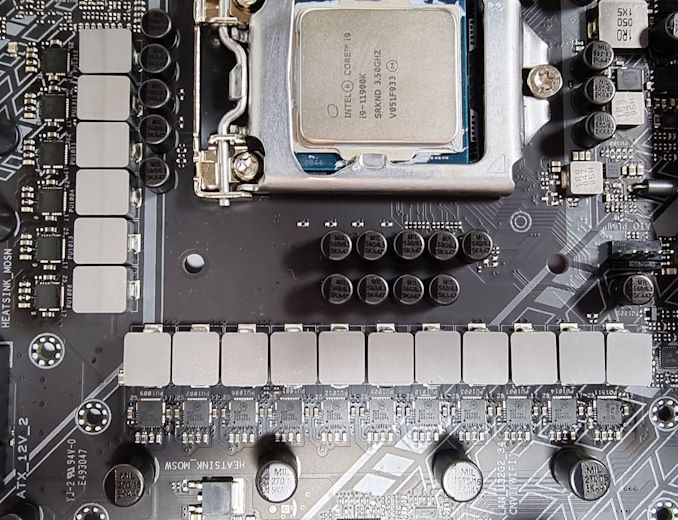 Taking a deeper look at the power delivery on the ASUS TUF Gaming Z590-Plus WIFI, it is using a large 14+2 design. The CPU section is using fourteen ON Semiconductor NCP302150 50 A power stages in a teamed configuration. This means the fourteen phases for the CPU are in fact operating with seven channels but without doublers. This is the same method employed on the SoC section, which includes two ON Semiconductor NCP302150 50 A power stages operating in a teamed array. The power delivery is controlled by a Digi+ ASP1900B PWM controller operating at 7+1. Providing power to the CPU is an 8-pin and 4-pin 12V ATX EPS 12V power input pairing.

Keeping the power delivery cool is a pair of VRM black metal heatsinks, one smaller one and a larger one which doubles up as a rear panel cover. ASUS is using deep channeled grooves in the metal to catch passive airflow within a system. The impressions on the thermal pads show that they are making good contact with the power delivery components. 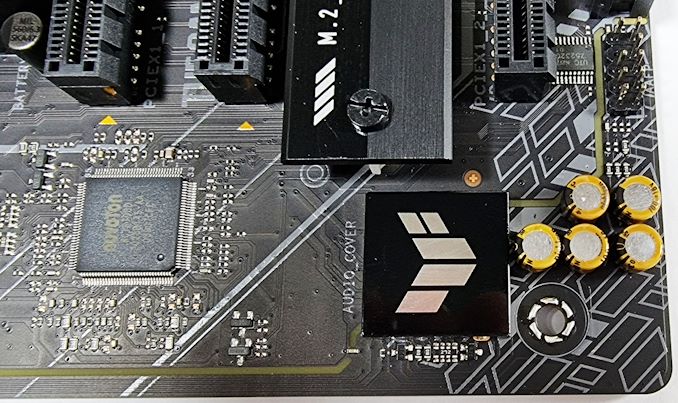 Focusing on the audio solution on the TUF Gaming Z590-Plus WIFI, ASUS is using a Realtek ALC S1200A HD audio codec, which is assisted by five Japanese Nichicon gold audio capacitors. ASUS also includes a front panel audio header. The codec itself is covered by a small square metal EMI shield, with a line of PCB separation to reduce electromagnetic interference from outside sources and from the rest of the board's components.

On the rear panel is a varied selection of input and output, which is spearheaded by one USB 3.2 G2x2 Type-C, two USB 3.2 G2 Type-A, two USB 3.2 G1 Type-A, and two USB 2.0 ports. For users looking to leverage integrated graphics, there's an HDMI 2.0 and DisplayPort 1.4 video output pairing, while ASUS includes a PS/2 combo port for legacy peripherals. For onboard audio, there are five color-coded 3.5 mm audio jacks and S/PDIF optical output which is powered by a Realtek ALC S1200A HD audio codec. Focusing on networking, ASUS includes an Intel AX201 Wi-Fi 6 CNVi, as well as an Intel I225-V 2.5 GbE controller. 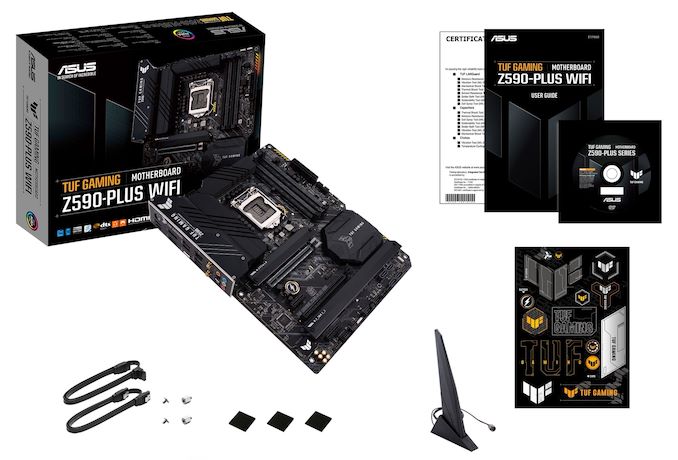 The most notable accessories included within the bundle are a pair of SATA cables, an ASUS Wi-Fi 6 antenna, two M.2 installation screw kits, a user manual, and a support DVD. For users who like to jazz up their systems, ASUS also includes a TUF Gaming themed sticker sheet.