Dell XPS 12 Review: A Jack of All Trades Flipscreen Ultrabook 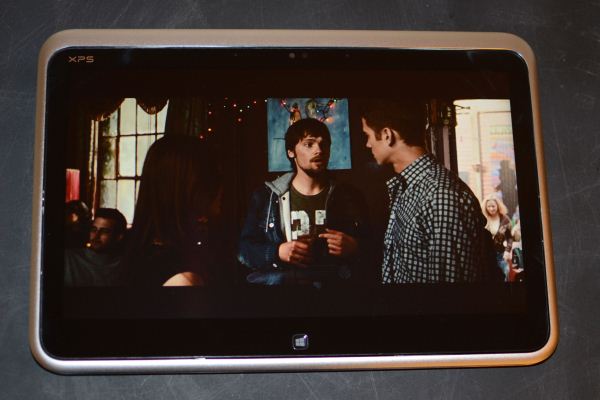 I’ve been using Android tablets for almost two years now, along with an iPod Touch 4th Gen. By this point, I’m well aware of their benefits as well as limitations. Frankly, there’s no way I would ever want to use one of the current tablet devices as my primary work system—even with a keyboard, the experience would be far less than ideal! But as a secondary (or tertiary) device, tablets can be quite useful. I carry my Android tablet with me to some weekly meetings and find it a great tool for pulling up information, or when I’m heading out to some new address the built-in GPS functionality and turn by turn directions are also quite useful. So, that’s the short rundown of how I’ve been using tablets for the past year or two; how does the Dell XPS 12 work when placed into a similar role?

Frankly, it can feel a little bipolar—some things work great, and others have me grumbling and searching for a solution for a while. The new Windows UI and applications are generally good and with a full Core i7 behind them (along with a fast SSD), the experience is very snappy. Even with a Tegra 3 tablet, I find that surfing the web can at times be tedious—some sites that aren’t optimized for a mobile device simply take far longer to load than I’m used to on my laptop/desktop; surfing the web on my iPod Touch is something I now actively avoid because it’s so slow. With the XPS 12, it’s as fast as a typical PC experience and works great.

Here’s where I run into my first trouble; my Windows 8 account (initially configured on a desktop) is set to open web pages in IE10 using the classic desktop application rather than the “new experience” fullscreen IE10. Opening up Internet Options shows this setting, but it’s grayed out. I eventually managed to change it to opening in the Win8 UI IE10 by resetting the Internet Options to defaults, but you’re probably wondering why this even matters. The issue is that when you’re browsing the web on a tablet, you switch between portrait and landscape modes, you might want to zoom in/out on an area, etc. All of that functionality is present with the IE10 Win8 UI, but not with desktop IE10. It also doesn’t work the way I want if I use an alternate web browser like Chrome or Firefox, since these are just standard Windows desktop applications.

There are bigger fish to fry than the occasional issues with browsing the web, however. One problem isn’t really Dell’s fault: I am unable to find Windows 8 versions of quite a few applications that I use regularly on my Android tablets. There simply aren’t as many applications in the Windows 8 Store right now, and of the applications that are there (on all platforms, really), many are of questionable quality. Given time, I suspect most application developers will begin supporting Windows 8, but for the time being it’s a concern.

I think the biggest hurdle for me has to do with the size of the device. Having used several 10” (give or take) tablets, along with a 4” iPod Touch and a few 7” devices, I have to say that 7-10” is the ideal size for most users looking at a tablet. Smartphones can do a lot, but I don’t know many people that are really looking for a large (4.5” or greater) smartphone, and for those of us with less than stellar eyesight I think the smaller displays are simply too small for many tasks (reading lots of text). Maybe it’s just the old curmudgeon in me, but 7-10” is a good size for a note taking, reference material type of device. 12.5” on the other hand starts to feel too conspicuous. I took the XPS 12 to a meeting where I regularly use a 10” Android device (and many others do as well), and when I pulled it out to read through some of the topics we were discussing, I felt incredibly conspicuous—like everyone in the room suddenly looked over and wondered who had brought the gigantic tablet. Maybe it was all in my head, but those extra couple inches make a big difference. The same goes for the doubling of weight, and at roughly 3.3 pounds the XPS 12 is a moderately heavy Ultrabook, never mind tablet.

There’s a well known phrase that I used as the subtitle of this review: Jack of All Trades. The corollary to that is “Master of None”, and that certainly applies to the XPS 12. It’s not the thinnest or best looking Ultrabook out there, it’s not anywhere close to being the best tablet I’ve used, and while the capability of running a variety of Windows applications is good on one hand, it can also get in the way at times (like when you’re after a tablet-style fullscreen application). There’s no particular area where I would say the XPS 12 is at the top of its class, but that doesn’t mean it’s a bad device. The real question is what you’re looking to do with your next Ultrabook. If you’re primarily after a laptop but you occasionally want the convenience of hiding the keyboard and using the device as a tablet, I think Dell is on to something with the XPS 12. If on the other hand you primarily want a tablet but you occasionally want to type and use it as a laptop, a detachable keyboard/dock would seem the better approach.

The XPS 12 ends up being good in many areas, but ultimately the question is if it’s good enough—in particular, is it a compelling enough device to justify the price tag? As noted earlier, I think Dell (and Ultrabooks in general) are pushing the limit of what most consumers are willing to spend, and even though the XPS 12 has a lot of good features, at $1200+ it will be a tough sell. At $1000, there’s a lot to recommend, and considering you can get a Surface Pro with similar hardware and a type cover for $1130 (which is probably still too high for most!), that needs to be the starting point. (Note that the Surface Pro also comes with a pen, so that's probably a $50 add-on.) The next generation hardware with Haswell should hopefully reduce sizes and allow for better options, which leaves the XPS 12 as an interesting device for some, but one that will likely get replaced in another six months.

We’ll hit the performance results quickly on the next couple of pages, but there’s not much we haven’t seen before. The XPS 12 performs in line with its hardware, which means it’s a bit faster than Surface Pro but generally slower than standard voltage mobile processors. As with the Acer S7 (and thanks to Windows 8), it offers exceptionally fast boot and resume times (around 10 seconds or less) and decent performance for most other tasks. It’s not a gaming system (or at least, not a system to play games like Far Cry 3), and battery life isn’t going to be as good as any ARM-based tablet that you care to name, but performance in other areas is head and shoulders above the same ARM devices.