For HandBrake, we take two videos (a 2h20 640x266 DVD rip and a 10min double UHD 3840x4320 animation short) and convert them to x264 format in an MP4 container.  Results are given in terms of the frames per second processed, and HandBrake uses as many threads as possible. 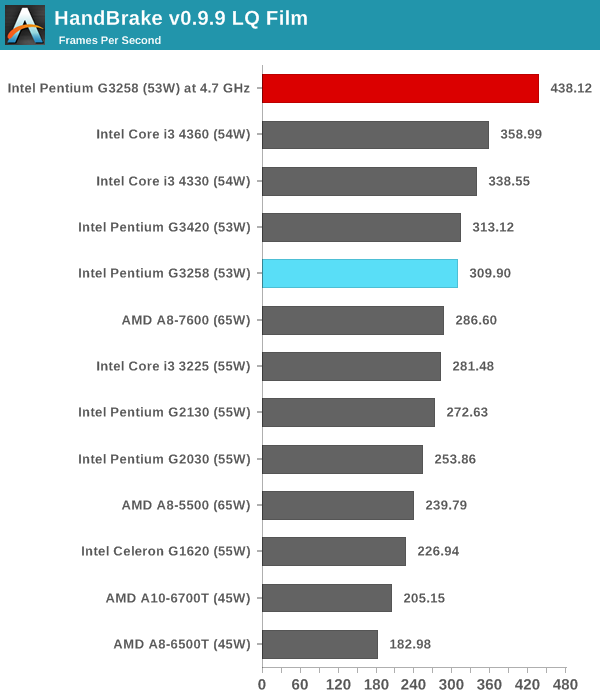 For low quality encoding, single threaded performance wins out over threads despite the extra multi-threading of i3 processors. 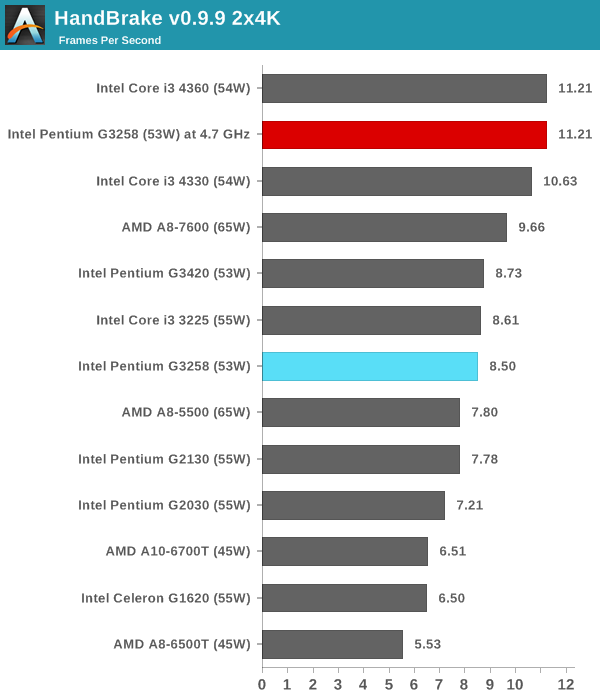 For larger frame sizes, the extra MHz of the overclock brings it on par with the i3-4360, although one might suggest spending the extra $40 for the i3 to ensure full stability.

Agisoft Photoscan creates 3D models from 2D images, a process which is very computationally expensive. The algorithm is split into four distinct phases, and different phases of the model reconstruction require either fast memory, fast IPC, more cores, or even OpenCL compute devices to hand. Agisoft supplied us with a special version of the software to script the process, where we take 50 images of a stately home and convert it into a medium quality model. This benchmark typically takes around 15-20 minutes on a high end PC on the CPU alone, with GPUs reducing the time. 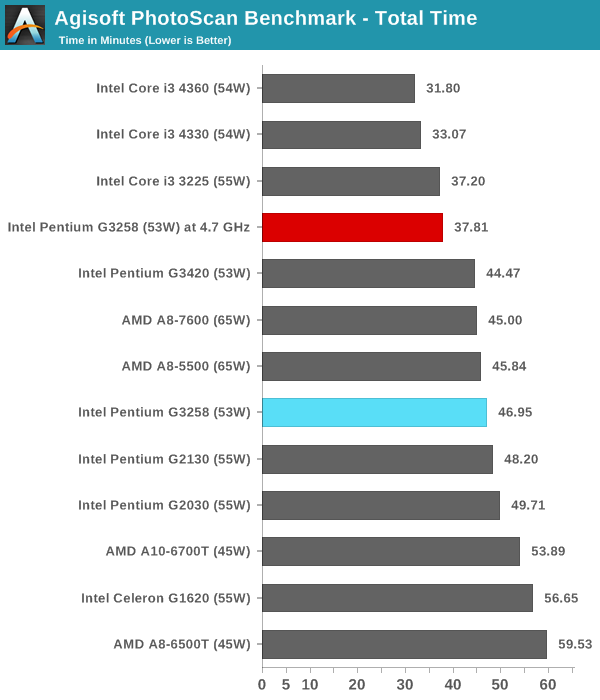 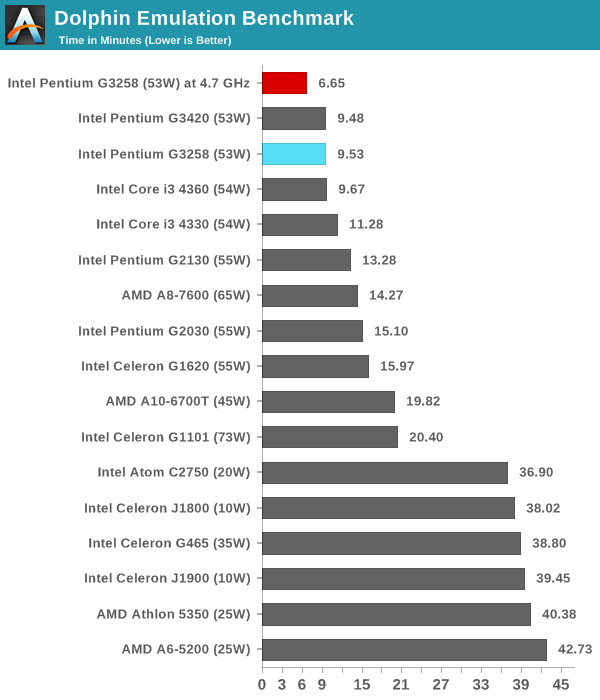 Dolphin is another example where Haswell combined with strong single threaded performance wins. 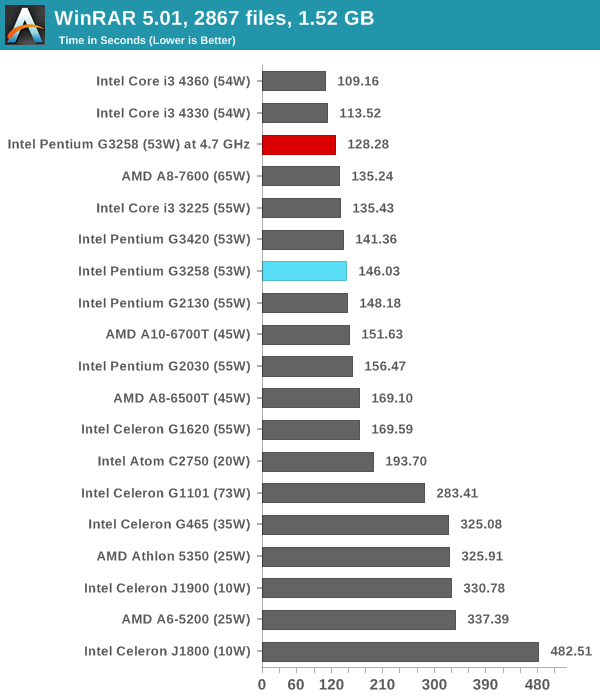 A new addition to our CPU testing suite is PCMark8 v2, where we test the Work 2.0 and Creative 3.0 suites in OpenCL mode.  As this test is new, we have not run it on many AMD systems yet and will do so as soon as we can. 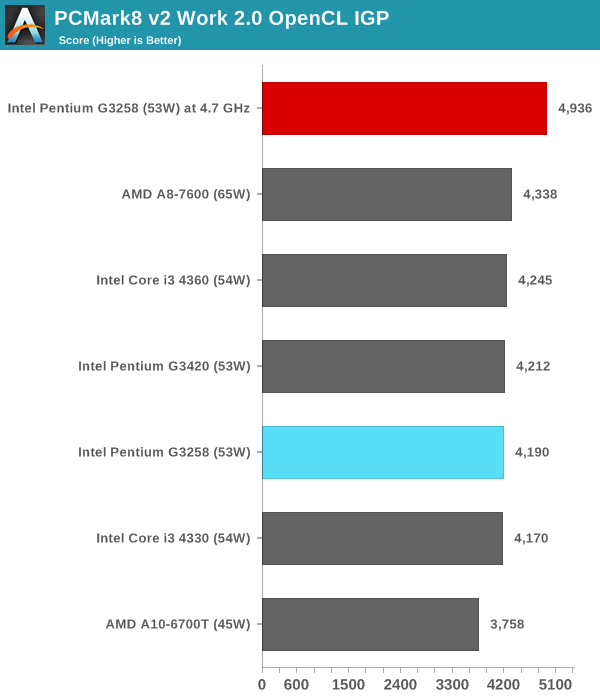 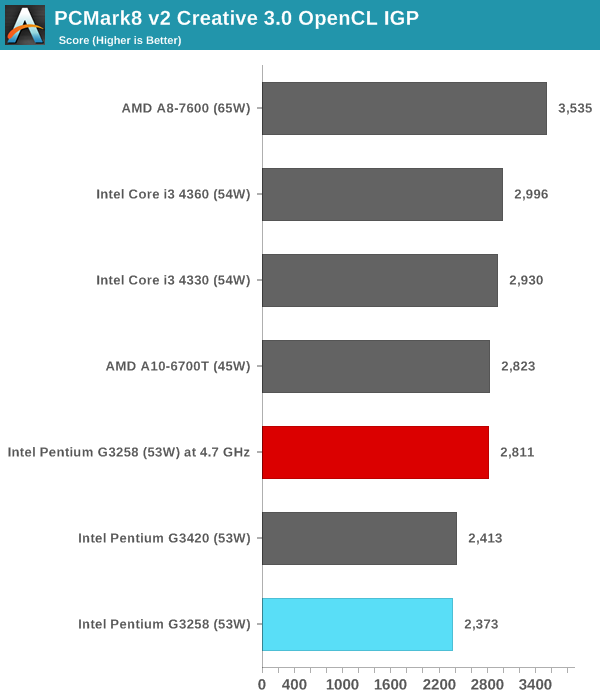 In both of our PCMark8 v2 results, overclocking the CPU gave a significant jump in performance.  This would be down to the single threaded nature of parts of the benchmark, allowing web browsing and the snappyness of the system to be sped up.

Hybrid is a new benchmark, where we take a 4K 1500 frame video and convert it into an x265 format without audio. Results are given in frames per second. 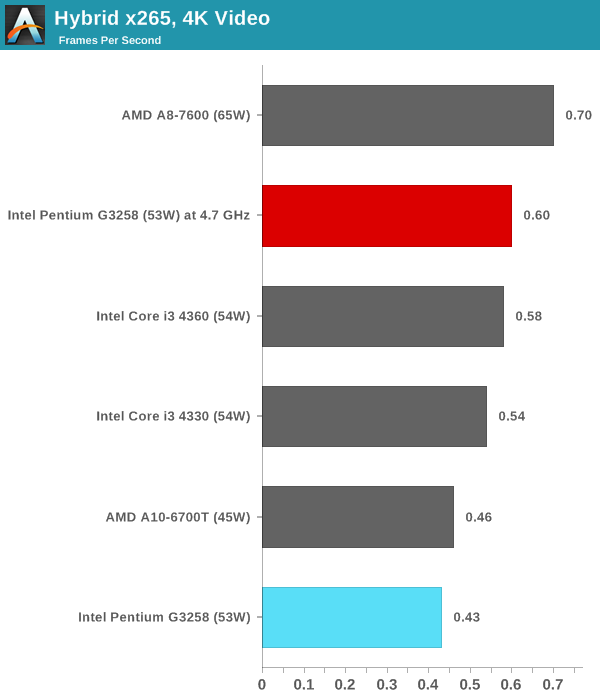 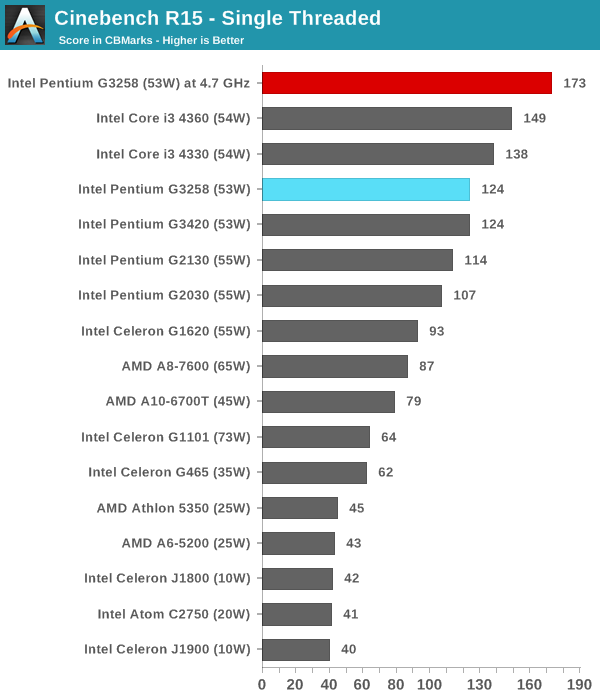 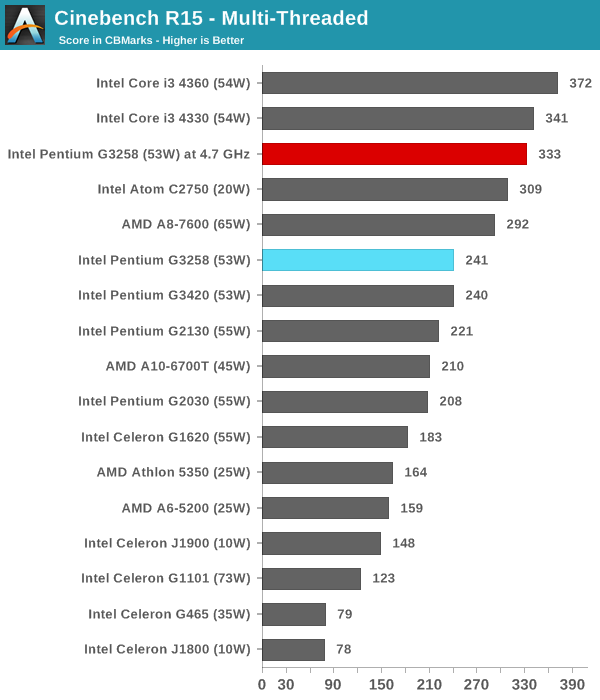 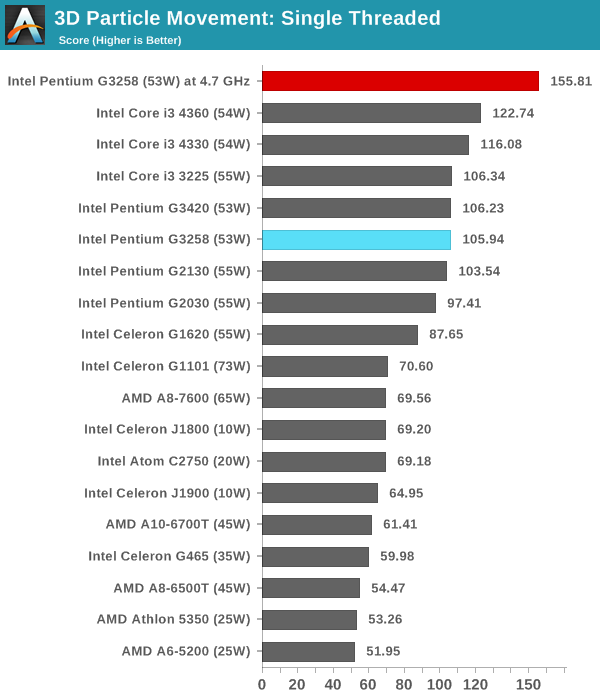 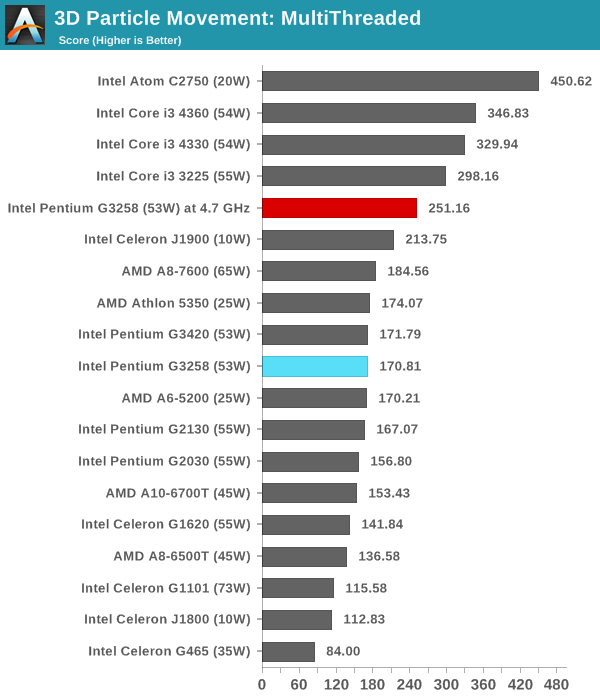 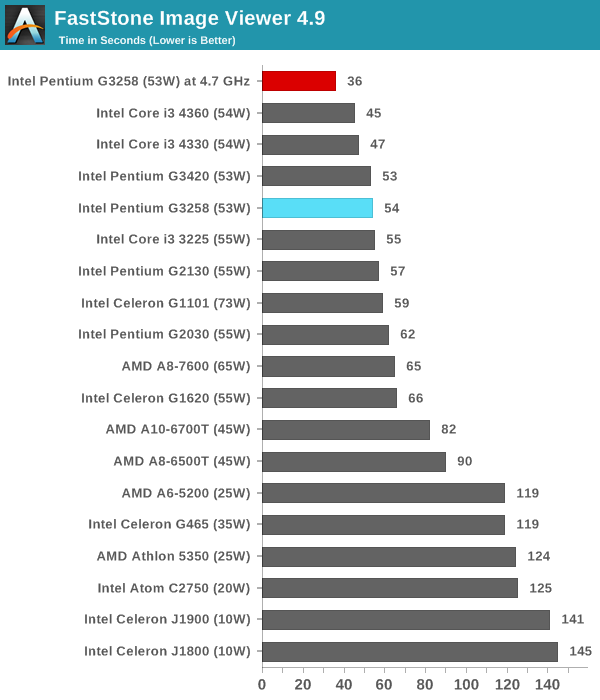 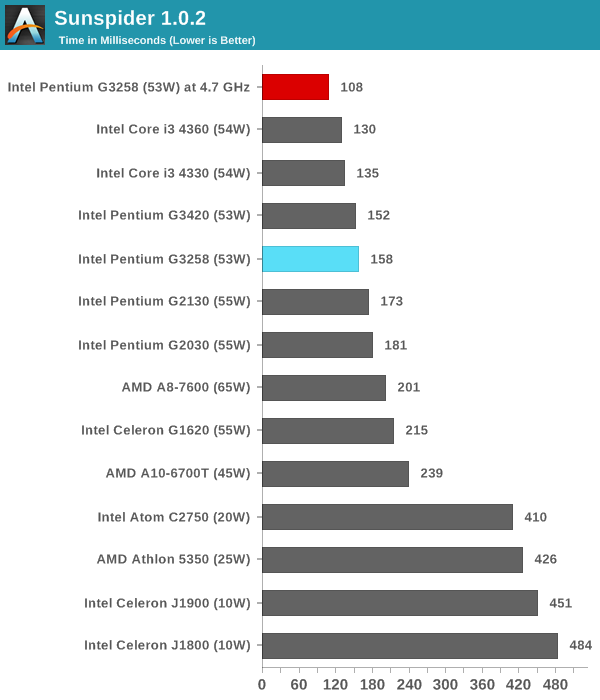 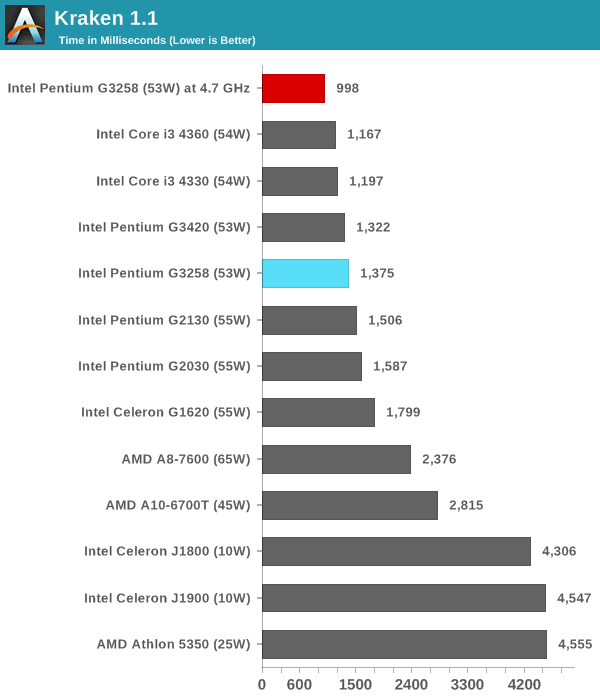 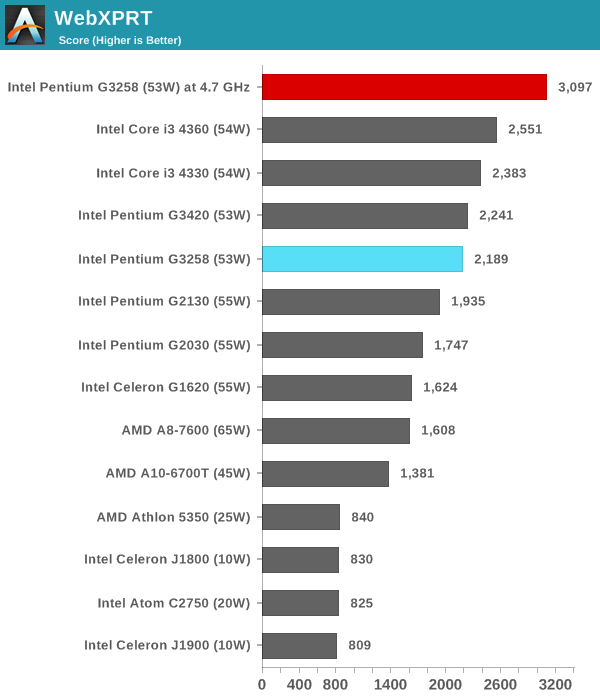 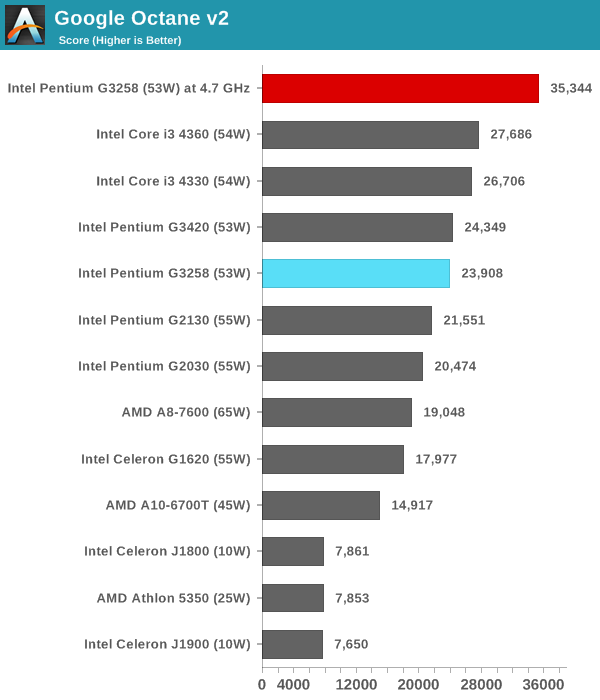 The usage model for an overclocked G3258 comes in highly single threaded environments. 4.7 GHz is nothing to be sniffed at, especially when it comes to web browsing or simple photo editing where it beats out more expensive processors. With multithreaded scenarios, it battles with the i3 depending on if the software can use hyperthreading to its full advantage.  If the software can do that, then the i3 still wins out.