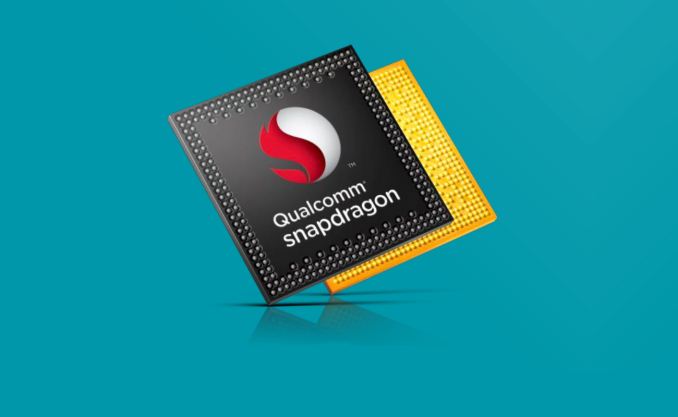 Qualcomm is bringing some premium experiences to its mid-tier lineup with the addition of the Snapdragon 660 and Snapdragon 630 Mobile Platforms. Improved connectivity, enhanced imaging, faster charging, and even machine learning features, in addition to the usual CPU and GPU improvements, help make these 600-series parts particularly interesting.

Another shared component between the Snapdragon 660 and 630 is the Spectra 160 ISP. While a step down in processing performance from the Spectra 180 ISP in Snapdragon 835, it still supports many of the same features, including hybrid autofocus systems, dual photodiode phase-detect autofocus (2PDAF), better electronic image stabilization for video, and enhanced low-light processing for still images. It can also handle dual-camera setups with Qualcomm’s smooth “optical zoom” feature when using two cameras with different focal lengths. It can also integrate data from both cameras to produce bokeh effects or to improve image quality.

Another advanced feature supported by the Snapdragon 660 and 630 is Qualcomm’s Quick Charge 4 fast-charging technology, which was previously only available with Snapdragon 835. Quick Charge 4 promises up to 20% faster charging and 30% higher efficiency than the previous generation Quick Charge 3. 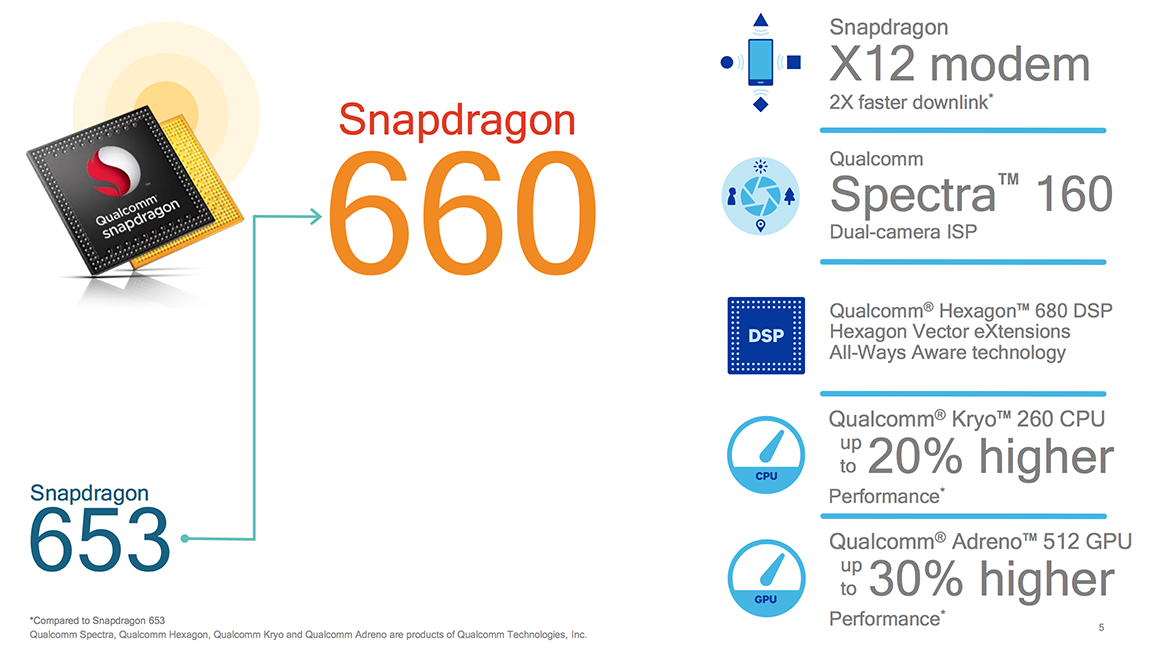 Alongside the Kryo 260 CPU is the Adreno 512 GPU that delivers up to 30% better performance on average than the Adreno 510 GPU in Snapdragon 653, according to Qualcomm. Some of the gain likely comes from a frequency increase (perhaps a lot of it), but it’s still a pretty significant jump, although it should still fall below the peak performance of the Adreno 530 GPU in Snapdragon 820. It supports the latest 3D graphics APIs, including Vulkan, and can power displays with up to 2560x1600 resolution. 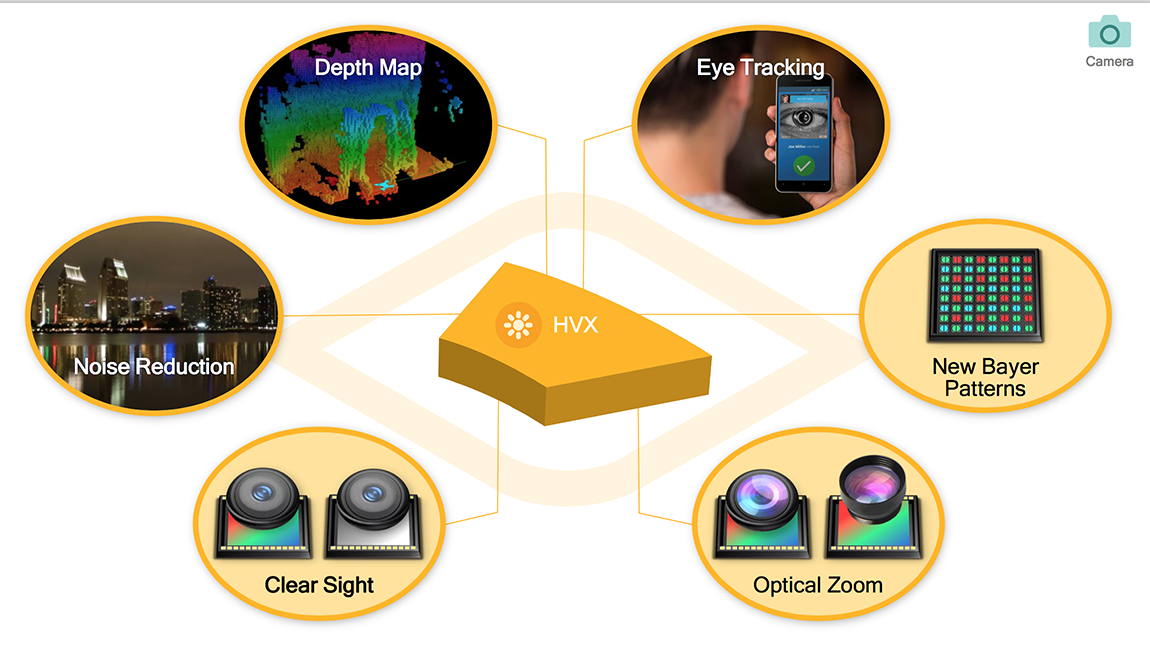 Another significant addition to Snapdragon 660 is Qualcomm’s Hexagon 680 DSP, which made its debut last year in the Snapdragon 820 SoC and features Hexagon Vector eXtensions (HVX) specifically designed for advanced photo and video processing, virtual reality, and computer vision workloads. This DSP can work on two vector threads in parallel, each containing four 1024-bit SIMD pipelines (a typical ARM CPU core contains two 128-bit SIMD NEON vector pipelines for comparison), allowing each HVX context to work on 4,096 bits/cycle compared to 256 bits/cycle for a single CPU core. The Hexagon 680 also contains four threads for scalar instructions too, each with 4 VLIW pipelines. Using up to two scalar threads and two vector threads in parallel allows concurrent execution of audio and imaging tasks.

The Snapdragon 660 supports Qualcomm’s Snapdragon Neural Processing Engine SDK, along with TensorFlow and Halide frameworks on the Hexagon 680 DSP, bringing advanced machine learning and computer vision capabilities to the 600-tier for the first time.

The Snapdragon 630 SoC uses a familiar octa-core Cortex-A53 CPU configuration. Unlike the Snapdragon 625/626 that it replaces, the Snapdragon 630 has a more distinct big.LITTLE arrangement with four A53s running at up to 2.2GHz (the same as the S626) sharing a 1MB L2 cache and four more A53s only reaching up to 1.8GHz and sharing a smaller 512KB L2 cache. While there should not be much difference in CPU performance and power compared to the Snapdragon 626, the Snapdragon 630’s Adreno 508 GPU performs 30% better on average than the S626’s Adreno 506 GPU. It also supports Vulkan and all of the latest 3D graphics APIs at resolutions up to 1920x1200. The Hexagon 642 DSP still supports Qualcomm’s Snapdragon Neural Processing Engine SDK for machine learning and TensorFlow, but does not share the Hexagon Vector eXtensions (HVX) microarchitecture of the more powerful Hexagon 680 and 682 DSPs. 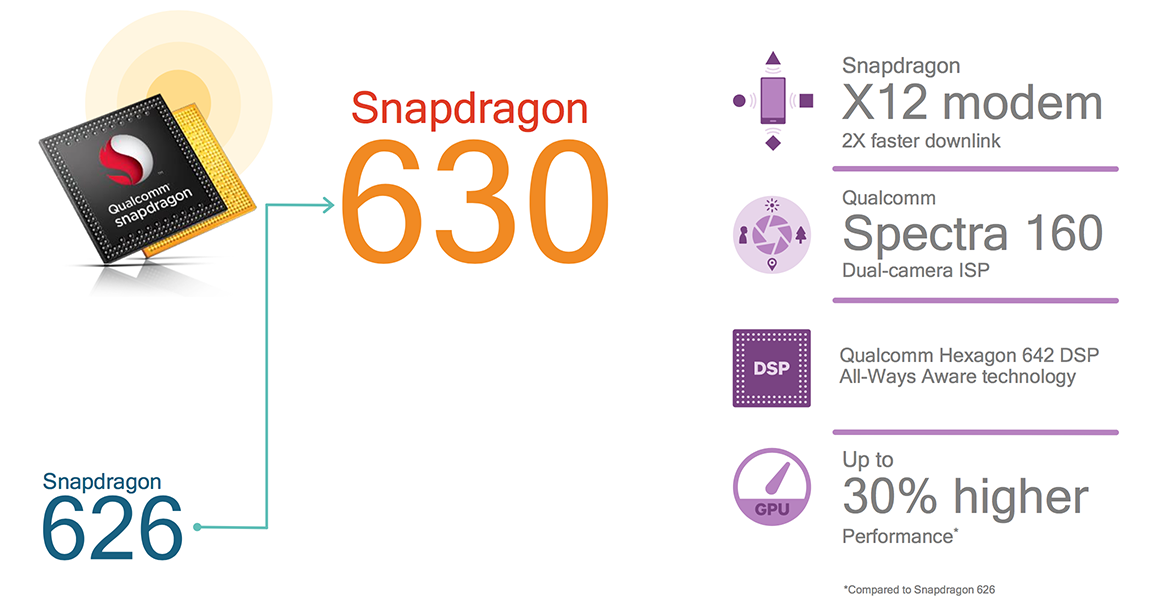 Both of the new Snapdragon 660 and 630 platforms include features and capabilities previously seen only in the premium 800-tier, and also add new technologies like Bluetooth 5 and LPDDR4 RAM support (up to 8GB), which reduces power consumption and improves bandwidth compared to LPDDR3. The Snapdragon 660 sounds particularly compelling, because it appears to deliver a very similar experience to last year’s Snapdragon 820 but, presumably, at a lower price point.