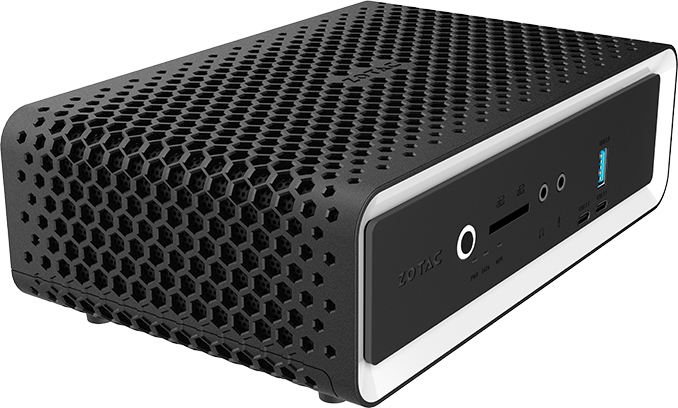 ZOTAC is prepping yet another passively-cooled ultra-compact form-factor (UCFF) PC aimed at people looking for silence and portability. The ZBOX CI660 nano system will feature a new chassis and use Intel’s 8th Gen Core i7 processor with four cores, which will be a significant upgrade when compared to ZOTAC’s previous-gen fanless machines powered by dual-core CPUs. The maker will demo the new system at Computex next week.

The most noticeable thing about the ZBOX CI660 nano is its brand-new chassis. For years ZOTAC has used “half-cube” Intel NUC-like enclosures for the CI-series systems (technically, this shape is called cuboid/rectangular parallelepiped). With the CI660 nano, the company decided to go with a larger brick-like cuboid chassis (see estimated dimensions in the table below), possibly to improve cooling capabilities of the platform and increase maximum processor TDP to 25 W. The ZBOX CI660 nano features familiar honeycomb structure, so if you are familiar with ZOTAC’s PCs, you will recognize this one at first sight.

ZOTAC says that the CI660 nano supports processors with up to 25 W TDP. This does not quite allow to install Intel’s Core i7-8559U CPU with four cores and Iris Plus Graphics 655 without programmable TDP reduction (from 28 W to 20 W), but the 25 W TDP may be important for another reason. Intel’s Core i7-8550U/8650U processors feature default TDP of 15 W and run at 1.8/1.9 GHz default frequency, but they can Turbo Boost themselves to 4/4.2 GHz provided that they stay within TDP and have sufficient cooling. Therefore, to keep the chips running faster for longer periods of time, or even TDP-up them all the way to 25 W to increase base frequencies, system makers need better cooling. As a consequence, some SFF/UCFF passively-cooled systems may get bigger. ZOTAC has not officially disclosed model numbers of CPUs it plans to use for the CI660 nano, but since Intel has only two 8th Gen Core i7 chips that fit into a 25 W thermal envelope, there are only two aforementioned options available.

Moving on to the connectivity of the ZBOX CI660. The system comes with 802.11ac Wi-Fi with an external antenna, two GbE ports, five USB 3.0 Type-A headers (one on the front), two USB Type-C ports connectors (on the front), a DisplayPort, an HDMI output, an SD card reader, and two 3.5-mm audio connectors. Meanwhile, unlike higher-end previous-gen CI-series machines, the new one does not have any Thunderbolt 3 ports.