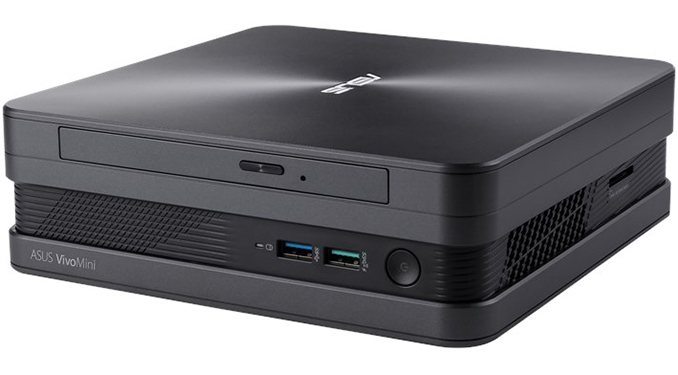 Coming in an iron grey aluminum chassis and measuring 197.5×196.3×49.3/61.9 mm, the ASUS VivoMini VC65-C1 is significantly bigger than Intel’s typical NUCs. But it also offers more features and expandability – and not to mention an integrated power adapter. The VivoMini VC65-C1 is based on the Intel B360 chipset and supports a variety of socketed Coffee Lake processors with TDPs up to 35 W. The high-end SKUs are outfitted with Intel's six-core Core i7-8700T or Core i5-8400T, whereas lower-end SKUs use Intel's quad-core Core i3-8400T or dual-core Celeron G4900T/Pentium Gold G5400T (see exact specs in the table below). 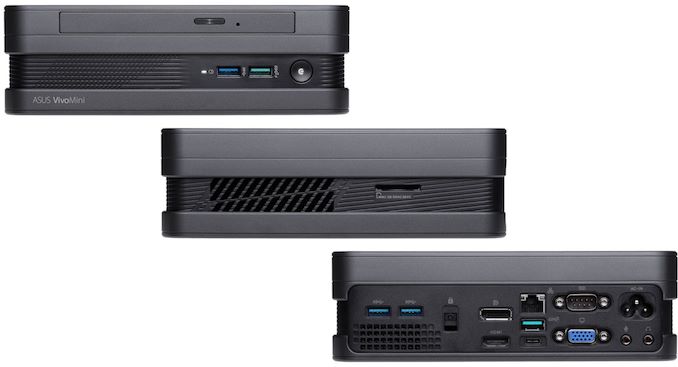 The VivoMini VC65-C1 has two DDR4 SO-DIMM slots supporting from 4 GB to 32 GB of memory. The system also has an M.2 slot supporting PCIe or SATA SSDs, as well as two or four 2.5-inch bays for SATA SSDs and HDDs. Select versions of the VC65-C1 come with a Blu-ray, DVD-RW or Ultra HD Blu-ray optical drives (the latter are available in Japan).

The VivoMini VC65-C1 from ASUS is a rather unique PC that can be used equally well both in the living room and in the office. On the one hand, systems with a Blu-ray/Ultra HD Blu-ray drives can be used as HTPCs to playback 2K or 4K movies in premium quality. On the other hand, multiple display outputs allow usage of two 4K monitors as well as compatibility with legacy LCDs with a D-Sub input.