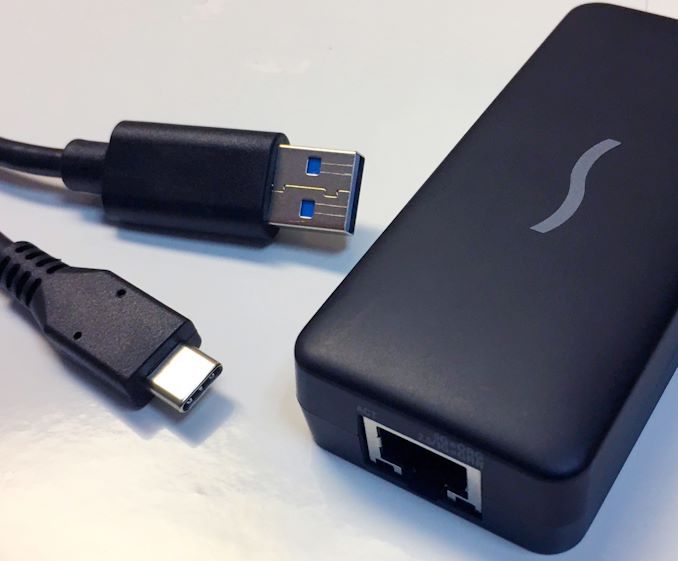 Sonnet has started sales of its Solo5G, their first 5 Gigabit Ethernet USB-C dongle. Designed to quickly and easily add support for faster networking to any laptop or desktop with a USB interface, the device is compatible with all three of the major OSes.

Adoption of NBASE-T networks is proceeding slowly due to two reasons: expensive Multi-Gig Ethernet switches and sporadic support of NBASE-T by PCs. Fortunately, higher-end desktops as well as gaming laptops are finally getting native NBASE-T support, but when it comes to mainstream and ultra-thin machines, such support is a rare occurrence; so to gain Multi-Gig support they need external USB adapters. A couple of years ago Aquantia (an independent company back then) developed its AQtion AQC111U and AQtion AQC112U USB-to-Ethernet chips along with reference designs for USB 3.0 to 2.5GbE/5GbE adapters to simplify production of such devices.

Sonnet’s Solo5G is based on the Marvell AQC111U controller (since Aquantia is now a part of Marvell), allowing 5GbE support to be added to any PC with a USB port. The device supports 5GBASE-T, 2.5GBASE-T, 1000BASE-T, 100BASE-TX networks over Cat5e cables at up to 100 meters. The dongle also supports advanced LAN features such as flow control or 802.11p QoS and works like a typical network adapter, so a driver for an appropriate OS is required.

The Sonnet Solo5G comes bundled with 0.5-meter USB-C to USB-C and USB-C to USB-A cables to maintain compatibility with new USB-C and legacy USB-A-enabled computers. As for portability, the dongle weighs 70 grams, so it should be easy to carry around.

The Solo5G USB-C to 5 GbE adapter is available now directly from the company at an MSRP of $79.99, which is not particularly cheap, but which is affordable enough to add NBASE-T capabilities to a PC without breaking the bank.