One of the targets of the modern foundry business is to have a wide array of manufacturing process technologies. This enables it to cater to as many customers as possible. That includes logic, embedded memory, radio frequency, analog, high voltage, long life cycle, and now silicon photonics. As part of a partnership between GlobalFoundries and PsiQuantum announced today, new proprietary manufacturing tools have been installed into GlobalFoundries' most advanced facility in Malta, New York. This will enable GF to build silicon photonics to enable what could be a 1 million+ qubit quantum computer from PsiQuantum.

The nature of process node manufacturing is varied and the research can be highly targeted in many different directions. If all you care about is peak logic frequency, then a process can be designed to facilitate that, but if you need the densest memory, or embedded non-volatile memory, or you might have high voltage silicon sensors, then the process technology needs to vary and the IP portfolio has to be broad enough to build these parts. Over the last few years, we have seen GlobalFoundries develop its customized processes, such as 22FDX and 12FDX which are cost-effective FDSOI technologies for low power embedded applications, such as RF or mid-tier IoT, and even that has optimizations for higher performance modes (at the expense of efficiency) should a customer need it. 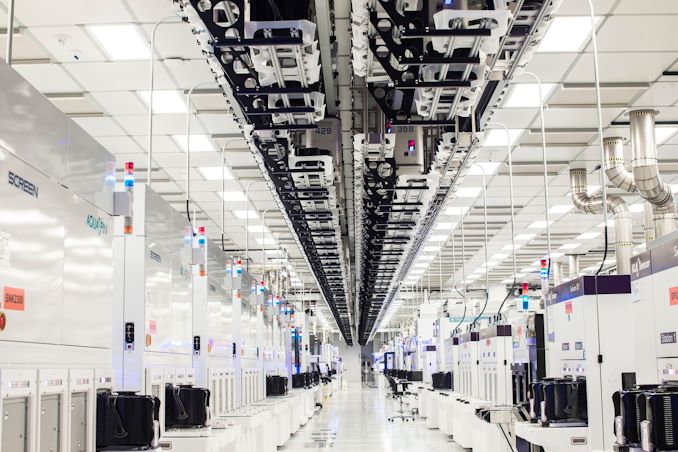 Today’s announcement is that GlobalFoundries is expanding its manufacturing portfolio in a very different way than it has previously. In partnership with PsiQuantum, part of the Fab 8 facility in Malta and the Fab 1 facility in Dresden have new proprietary equipment specifically for the production of core quantum computer components. PsiQuantum’s goal is its Q1 system, a 1 million+ photonic qubit quantum computer, which needs critical semiconductor components to function. PsiQuantum lists single-photon sources and single-photon detectors (the silicon photonics part), and control circuitry to scale into a quantum computing solution. The Photonics will be built in Fab 8, while the control chips will be built in Fab 1.

Part of the big issue with quantum computing is controlling qubit coherency. There’s no point building a qubit if it isn’t stable, and controlling the stability of one qubit is hard, let alone a million. In order to assist with this, quantum computing applies error correction algorithms, however the results of which mean that for one logical qubit, anywhere from 10 to 100 physical qubits are needed. This scales up the problem immensely. So while a 1000 logical qubit computer might be powerful for the algorithms that can run on it, there might actually be 100,000+ physical qubits due to the requirements of coherency and control. We’re nowhere near 1000 logical qubits today, and part of that is manufacturing the right technology to build such a system. This is why we’re getting an announcement out of GlobalFoundries and PsiQuantum today.

PsiQuantum’s goal is to be in a position to assemble a final photonic qubit quantum computer by mid-decade. The partnership between the companies is also highlighted in the announcement as an example of the US focusing on global technology leadership in quantum computing, and supporting domestic supply chains with feature-rich solutions.

GlobalFoundries is currently owned by Mubadala, the UAE sovereign wealth investment fund, but is looking at a potential IPO in the US in the next 12 months or so. PsiQuantum is a 2016 private startup based in Palo Alto, with over $500m in venture capital funding, ~100 employees, and investors such as Playground Global, BlackRock, M12, and C4 Ventures.

The title photo is of one of PsiQuantum's 300mm wafers.