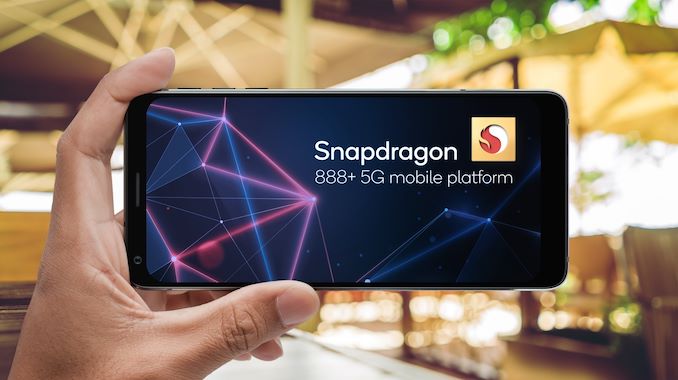 Today for the first day of Mobile World Congress, Qualcomm is announcing its usual yearly mini-refresh of its flagship Snapdragon SoC in the form of the new Snapdragon 888+. As in the previous few generations, right around the summer period, Qualcomm is taking advantage of the completed spring device cycle and shifting focus onto newer devices in the second half of the year with, and a new SoC that’s slightly boosts performance.

The new Snapdragon 888+ is a speed bin of the Snapdragon 888 that we’ve seen earlier in the year. What’s changed in the new unit is that Qualcomm is upgrading the CPU frequencies from the original 2.84GHz to 2.995GHz – a 5.2% performance upgrade. It’s not too much of a major upgrade, and I’m curious to see how it plays out in terms of power consumption as the X1 cores in the 888 were already quite power hungry.

Besides the CPU uplift, the AI engine has also seen a combined performance uplift through frequency bumps as well as software optimisations that increases the AI throughput from 26 TOPS up to 32 TOPS. As a reminder, this is an aggregate figure across all of the SoC’s computational blocks of CPU, GPU, and DSP/NPU.

The one thing that’s not been upgraded this year is the GPU performance, which is a bit unusual for a “+” part as normally in the past few years we’ve also seen frequency increases on this SoC block. Generally, this can be explained through the fact that the Adreno 660 in the Snapdragon 888 is already running at extremely high frequencies and corresponding high-power draw, and most devices today are not able to sustain those peak performance states – further increasing frequencies would have little benefits.

ASUS, HONOR, Vivo and Xiaomi were partner vendors which endorsed the new Snapdragon 888+ and are working on devices featuring the chipset. We should be expecting the first Snapdragon 888+ devices to start being announced in the third quarter.