Thunderbolt is the absolute fastest consumer interface available for users who want high-speed external storage. We proved this in our Pegasus R6 review where we sustained transfer rates of 1GB/s (8Gbps) from an array of five SF-2281 SSDs. There are just two problems with Thunderbolt today: 1) It's practically only available on Macs, and 2) the Promise Pegasus is extremely expensive.

In its cheapest configuration, the 4TB Pegasus R4 with four 1TB 3.5" HDDs will set you back a cool grand. Want the 6-bay version? That'll be $1500. And the top of the line 12TB model is priced at $2000. Less than $500 of that $2K bill is the retail cost of the hard drives, the rest is all chassis, controller hardware and of course manufacturer profit. As great as the Pegasus is for professionals who need the storage and performance, it's priced too high for most consumers who also want fast external storage. 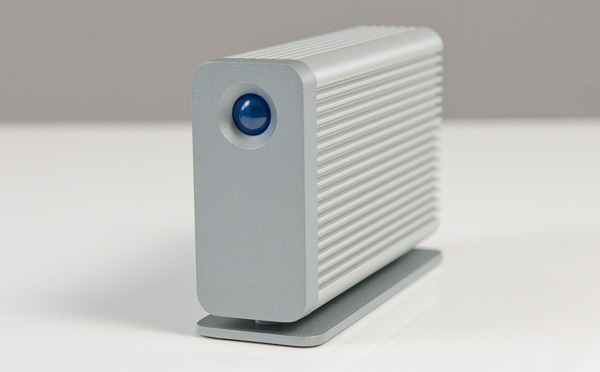 Last month LaCie released its Little Big Disk, a two bay (2.5"), all metal Thunderbolt enclosure. Like Promise, the Little Big Disk is available only with drives pre-installed. Sadly our hopes of meeting a BYOD Thunderbolt enclosure remain unfulfilled. LaCie's pricepoints are a bit more attractive than Promise's, although you are getting a far lower performance solution in return:

The drives are available on Apple's online store as well as Apple's retail locations. The 240GB SSD model is still several weeks away from availability, so what we're looking at today is the 2TB HDD solution. I only had a limited time with the Little Big Disk and wasn't allowed to take it apart, so forgive me in advance for the brevity of this review (although I did try to hit pretty much all of the highlights of the device).

As its name implies, the Little Big Disk is pretty small. The blue orb at the front functions as a power/activity LED as well as an on/off button. The design is beautiful and the construction very solid. LaCie likes to think the Little Big Disk is small enough to be portable, but its weight may discourage you from taking it wherever you go. Even if you don't travel with it, the Little Big Disk's size makes it a considerate resident on a desk. 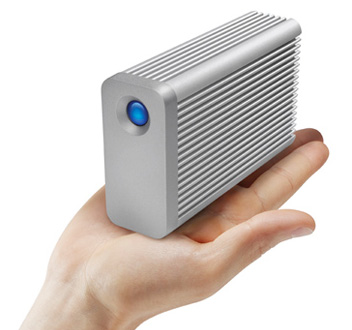 There's not much assembly required, the unit is ready to go as is. If you want a bit more stability however, LaCie supplies a small stand in the box that slides onto the bottom of the unit to prevent it from toppling over. The Little Big Disk does not come with a Thunderbolt cable, so be sure to tack on another $50 to your budget. Power is supplied via an external AC adapter that ships with swappable plugs for use in the US, UK, Australia and the EU. 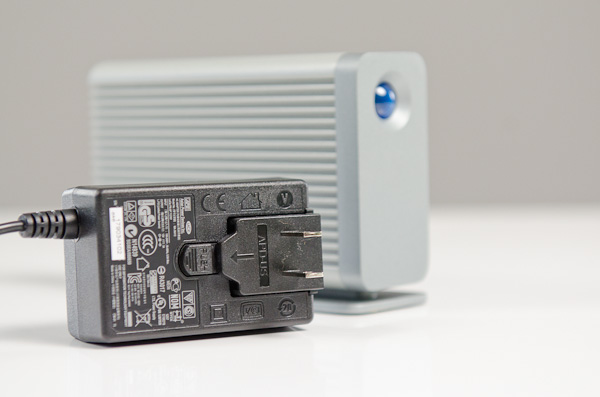 Inside the chassis are two 2.5" SATA hard drives connected to a basic, non-RAID SATA controller. The SATA interface is then routed over PCIe to an Intel Thunderbolt controller and finally sent out via a Thunderbolt cable to your Mac. LaCie was pretty strict on not having us take apart its review sample so the best I have are the shots of the internals we saw surface a while ago. A closer look seems to indicate a Marvell SATA controller (not a surprise) but it's impossible to tell whether or not it's a 6Gbps solution.

Given the absence of a RAID controller, LaCie relies on OS X's software RAID. By default a single Little Big Disk is configured as a two drive RAID-0 array. For the 2TB model that means you've got 2 x 1TB drives inside, and for the 1TB model that's 2 x 500GB drives. 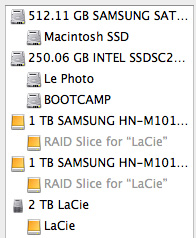 My LBD sample had two Samsung HN-M101MBB 1TB drives inside. These are 5400 RPM 3Gbps SATA drives with an 8MB buffer, 5W max power draw and 2.2W typical. Interestingly enough, the first user who posted pics of a dissected LBD found a pair of 7200RPM Hitachi 7K750 (500GB) drives in his. I don't have enough of a sample set to know whether or not all 1TB models use 7200RPM drives and all 2TB models use 5400RPM drives, but it looks like you can expect to see some variance between models.

With only a pair of 5400RPM 2.5" hard drives, the Little Big Disk isn't going to break any performance records. In fact, had LaCie outfitted the chassis with a single SSD we would've seen higher performance than the two-HDD setup it comes with from the factory. That being said, if you're a Thunderbolt Mac owner, the LBD is the second fastest external solution you can buy today (without resorting to an ExpressCard to eSATA bridge or something similar):

Sequential performance is obviously the LBD's strength, at over 200MB/s in both of our Iometer tests. This is the sort of performance you'd see moving large files (e.g. videos) to/from the device. We are completely limited by drive performance here, Thunderbolt is capable of at least 8Gbps as we've seen from our tests and the Little Big Disk is only pushing 1.66Gbps. Random performance is of course what you get from mechanical storage. An internal SSD will do better for your OS and apps, but for use as backup or media storage (photos, videos, archives, etc...) you'll see performance closer to 200MB/s.

One of the first things I tested was to see if the audio corruption issue I experienced with the Pegasus and Apple's Thunderbolt Display was present on the Little Big Disk. To recap, if you were playing music on the TB Display (via its internal speakers or USB audio connected directly to the monitor) while writing tons of data to the Pegasus you'd eventually get audio corruption. I tried the same test with a Mac connected via Thunderbolt in place of the Pegasus and didn't see an issue. I repeated the test with LaCie's Little Big Disk in place of the Pegasus and once more, didn't see an issue. The only time I got audio corruption was when I plugged in the LBD while the Thunderbolt Display was already playing music. Resetting the audio codec at that point fixed everything and I didn't see the problem resurface. As I alluded to in our Thunderbolt Display review, Promise developed and released the Pegasus before the TB Display was available. LaCie had the luxury of continuing testing and validation after the TB Display was launched, which likely gave it a bit of a leg up in this department. 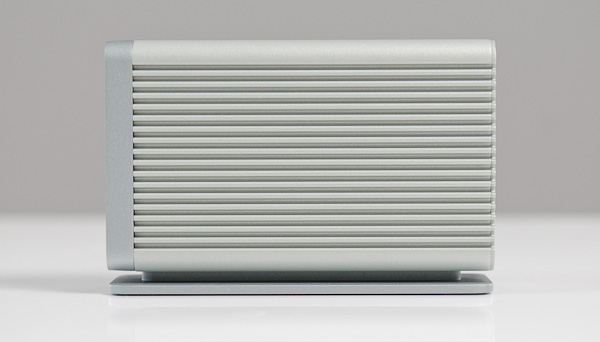 Interestingly enough, I couldn't get the LaCie LBD to daisy chain with my Pegasus, although I'm not sure which device was at fault there. If I connected the Little Big Disk after the Pegasus, the LaCie drive wouldn't work. If I connected the LBD before the Pegasus, the Promise array wouldn't work. The Little Big Disk did work properly connected directly to my MacBook Pro and Thunderbolt Display. Update: Moving the Thunderbolt Display to the end of my Thunderbolt chain (rather than the middle) fixed this issue. After I did that, both the LBD and Pegasus appeared. I was then able to move the Thunderbolt Display back to its original position in the chain and both drives continued to work as expected.

Power consumption isn't in-line with expectations. At idle the Little Big Disk pulls just under 8W, while under load (sequential writes) it's a hair over 12W.

The Little Big Disk is cooled via a single internal fan. The size of the chassis limits the fan size, which puts LaCie in an interesting predicament. LaCie could either allow internal temperatures to get uncomfortable warm and keep the chassis quiet, or keep temperatures in check and sacrifice noise. It picked the latter.

Under normal operation the 5400RPM drives in my LBD sample remained at around 44C. The highest I ever saw the drives hit was in the low 50s. Internal drive temperature doesn't seem to be a problem with the Little Big Disk, which is good news. 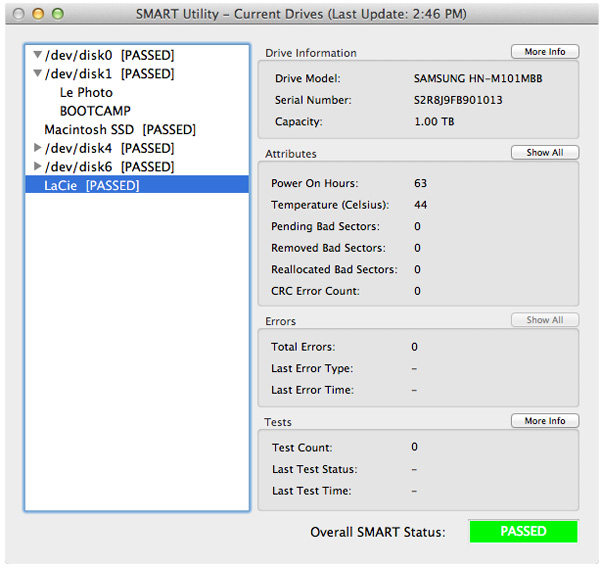 Unfortunately the chassis is loud as a result. It's louder than both the Promise Pegasus and a 15-inch MacBook Pro (at normal temperatures, under load with fans at full speed the MBP is louder). Thankfully there's no whine, it's just the sound of a lot of air being moved via a relatively small fan. It almost sounds like you've turned on a small desktop somewhere in the room. The noise is my biggest complaint about the Little Big Disk. My only hope is the SSD configuration will be able to back off on the cooling requirements and deliver a quieter solution.

Thunderbolt products are finally starting to roll out. The Pegasus was a good start, and the Little Big Disk gives customers a more palatable price point. To hit the lower price LaCie does sacrifice a bit on capacity and performance. The move to 2.5" hard drives and only being able to accommodate two of them in its small chassis limits peak performance to around 200MB/s. Compared to USB 2.0 and FireWire 800 options however, that's not bad at all. Even compared to GigE, you're still looking at a significant performance improvement. If you do a lot of large file transfers onto your external storage, the Little Big Disk will likely be a huge step up from your current solution. 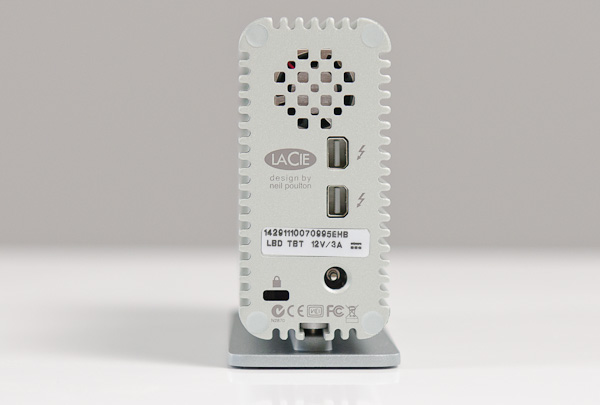 My biggest complaint about the Little Big Disk is its noise. While I'd rather accept a louder solution than one that kept drive temperatures uncomfortably high, I'd much rather not have to choose between either. LaCie may have painted itself into a corner here by aiming for such a small device size. If you're a stickler for quiet computing the LBD may bother you. If you're fine with some extra fan noise then you'll be just fine.

I do like the Little Big Disk chassis a lot, I only wish LaCie would offer it sans-drives to hit an even more affordable price point. The empty chassis game is a race to the bottom however and I don't see LaCie wanting to play in that space. We'll have to wait for other manufacturers to jump on the Thunderbolt bandwagon before we see a BYOD solution.

If I can't have an empty chassis, here's hoping that LaCie's forthcoming SSD version will be everything I hope for in an external Thunderbolt solution. With lower cooling requirements it could address the noise issues and performance should obviously go up. The only question is, will LaCie be able to deliver a solid-state Little Big Disk at a reasonable price? We'll find out soon enough...