With Thunderbolt ports available on both Macs and PCs, as well as Thunderbolt controller costs dropping thanks to the introduction of Intel's Cactus Ridge, the Thunderbolt storage space is alive and well with tons of competition. The market is full of everything from good single drive solutions, to high performance multi-drive RAID arrays. While very few drives exist that deliver the best combination of performance and value, a growing market is bound to develop some winners. 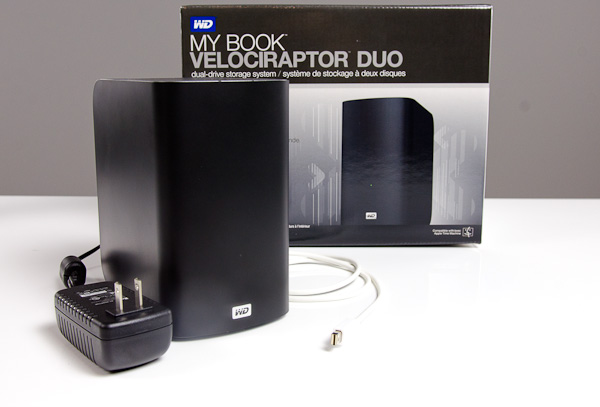 The VR Duo is available in a 2TB configuration, relying on software RAID-0 to combine the two internal 1TB drives. Unlike many earlier Thunderbolt enclosures, the VR Duo comes complete with a 1 meter Thunderbolt cable. The 2TB enclosure should etail for $900, which felt kind of pricey. To quantify what I was feeling, I went shopping at the Apple store and Newegg and put together the table below:

Ranging from $180 to $3000 there are a lot of options on the market today if you want a Thunderbolt device. At $900, Western Digital's My Book VelociRaptor Duo is hardly the most expensive drive on the market. But if we sort the data according to cost per GB things look a bit different: 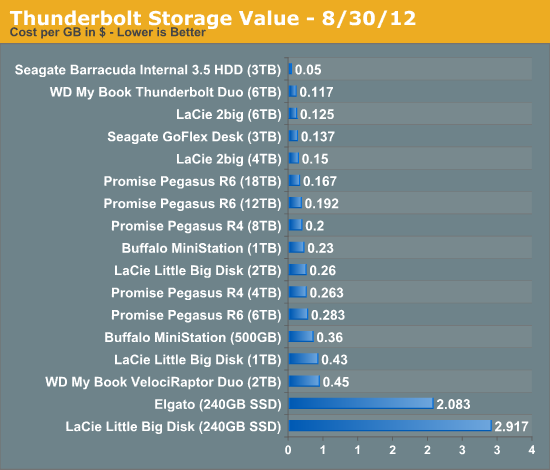 External drives are always sold at a premium, in the case of a Thunderbolt solution that premium can be considerable. While a single 3.5" 3TB Seagate Barracuda will cost you around $0.05 per GB, the most affordable Thunderbolt enclosure increases the cost per GB by over 2.3x that.

The big 3.5" Thunderbolt enclosures end up giving you the best value, but if you take into account performance it's actually the larger Promise Pegasus R6 enclosures that do very well. Remember the Pegasus R6 features six drives in a RAID array, letting you hit higher sequential performance levels than any of the other HDD based solutions that use one or two drives. The problem is only the 12TB/18TB configurations are remotely competitive in terms of $/GB, and they have quite a bit of capacity to pay for. If you're not keen on spending between $1600 and $3000 just on storage, you lose out on the efficiency curve. Although I haven't tried this myself, it might even be a better idea to software RAID two 6TB My Book Thunderbolt Duos if you need affordable capacity and performance. That being said, I'm not sure I'd recommend the configuration - I haven't tested it and it feels like there's potential for funniness.

The My Book VelociRaptor Duo is easily the most expensive, from a cost-per-GB standpoint, of the hard drive based Thunderbolt enclosures. Only the SSD based models are pricier. The appeal of the VR Duo is pretty nichey. You need to want better random IO performance than a standard hard drive setup, but not enough to push you into an SSD. The real question is whether or not the performance afforded by the drive is worth it. 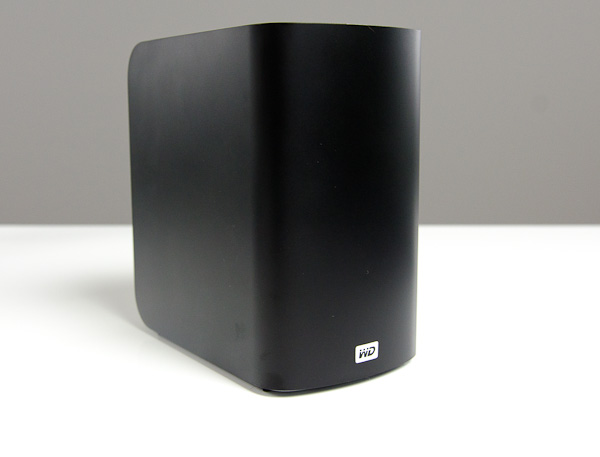 The black VelociRaptor Duo chassis is very similar to other members of the My Book family. There's only a single white LED that acts as a power/activity indicator on the front, and there's no power button. A Kensington lock port is located on the rear of the chassis, as well as the two Thunderbolt ports and DC input from the power adapter. 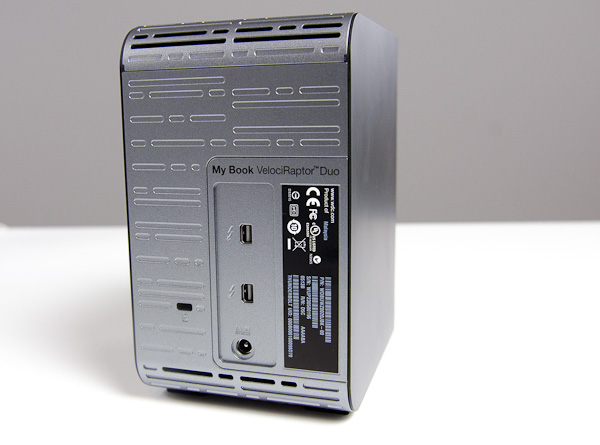 WD is proud of how easily you can get access to the drives for replacement. Just click the button at the top of the chassis to open the cover, unscrew/remove the top plate and pull out each drive independently. The VR Duo will only accept VelociRaptor drives, similar to other My Book enclosures in the past. 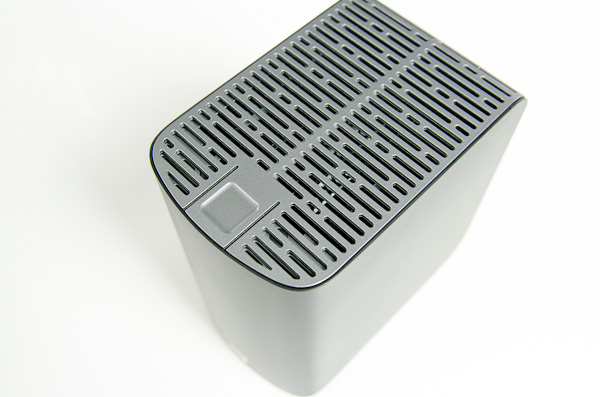 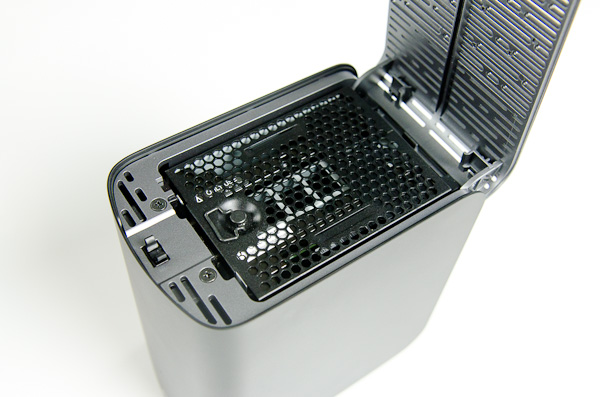 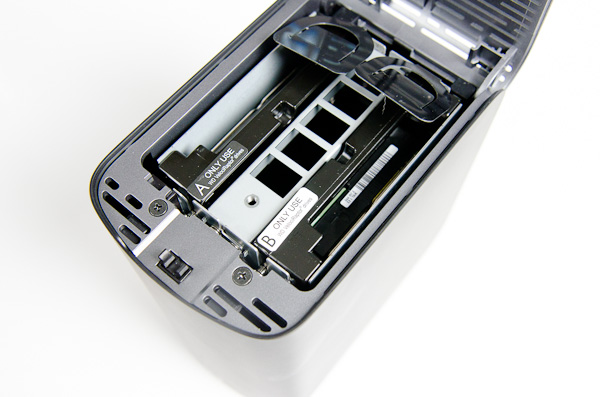 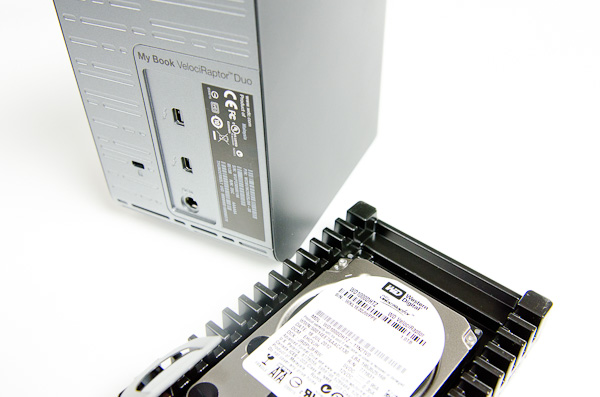 The drives come preformatted as an software HFS+ RAID-0 array. Western Digital supplies a simple management utility that lets you quickly reconfigure the RAID as a mirror or as two independent drives, you can also use the utility to perform basic tests on the drive. There's no detailed SMART reporting unfortunately, you'll need a third party tool for that.

QuickBench provides a reasonable estimation for large file sequential IO, and the My Book VelociRaptor Duo lived up to its specifications approaching nearly 400MB/s for seqeuential reads and around 365MB/s for sequential writes. 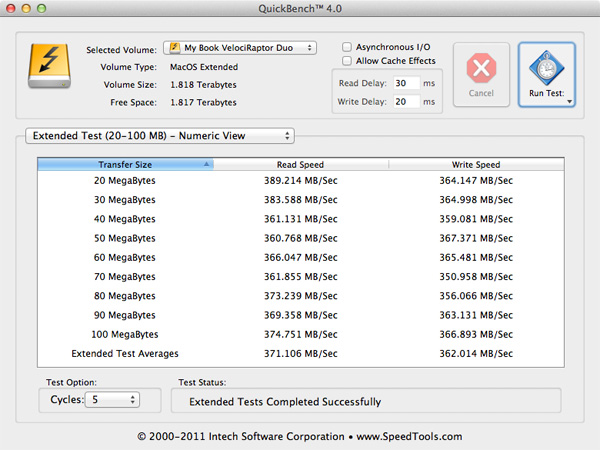 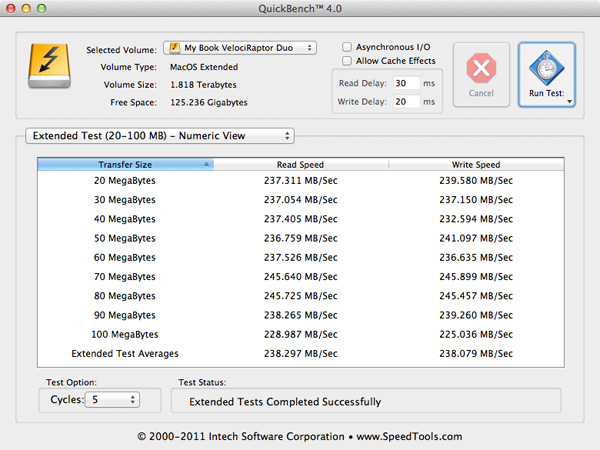 Minimum sequential performance for the full array is still pretty good at around 240MB/s.

I turned to Iometer to get an idea of how the VR Duo compared to other 3.5" HDD based Thunderbolt enclosures we have reviewed in the past:

The enclosure idles at 21.2W thanks to the two 10,000RPM drives inside and under load you're looking at a max of 25.6W. That's a good amount of heat to dissipate. As we've seen with many of these external 3.5" hard drive enclosures, thermals after continuous writes can be a problem. The My Book chassis is reasonably well ventilated. Rubber feet keep the chassis elevated slightly, allowing cool air in through the bottom grill and warm air out of the top. A fan inside the enclosure helps move the air along. I figured the best way to determine worst case thermal performance would be to fill the My Book VR Duo to its 2TB capacity, which I did. At a speed of roughly 250MB/s it took a bit over 2 hours to fill the 2TB RAID-0 array. Around an hour into the write process, the internal fan ramped up to its max speed and stayed there - which in turn ensured the VelociRaptors inside the My Book never got above 54C: 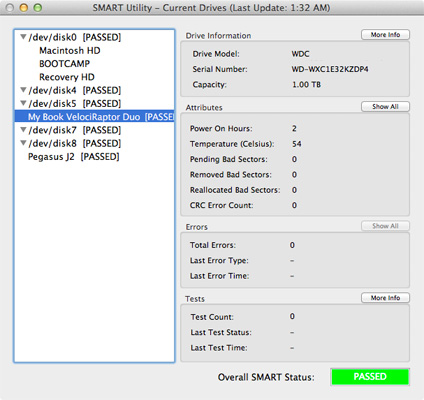 The downside is obviously fan noise. The My Book VR Duo's internal fan doesn't have a high pitched whine to it, but rather a sort of groan instead. The drives themselves aren't too loud unless you're doing a lot of random IO, in which case you're quickly reminded that you have two 10,000 RPM spindles in there. The chassis/drive combination gets loud enough to easily be the noisiest thing on your desk (assuming you don't have an obnoxiously loud desktop).

The Thunderbolt interface can easily deal with a ton of bandwidth. Given the right storage configuration you can sustain close to 1GB/s of transfers, while driving your display, all over a single unassuming cable. The advantages of Thunderbolt over USB 3.0 really come from its ability to hit ultra high transfer speeds, as well as its ability to connect storage and display to a notebook with a single cable. When a Thunderbolt device doesn't take full advantage of the former, then it quickly becomes a tougher sell.

In the case of the My Book VelociRaptor Duo, you get better performance than any other two-HDD Thunderbolt enclosure. The problem is it comes at a hefty price. With a cost per GB higher than most other Thunderbolt solutions, you have to really want the performance to make the VR Duo worthwhile. However, at only 400MB/s (about the speed of a single, good 6Gbps SSD), I'm not sure the cost is justified. If you've got good high speed storage inside your machine, I'd prefer going with the quieter, and more cost effective My Book Thunderbolt Duo instead. 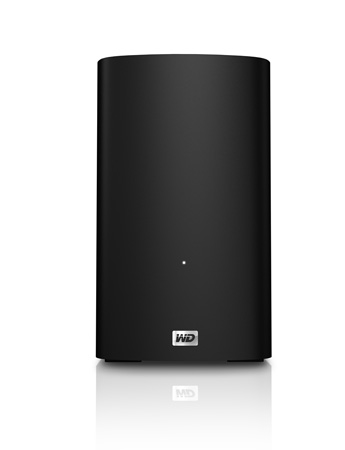 The only exception to the Thunderbolt Duo recommendation would be if you had a workload too big to fit on a reasonable priced SSD array, but still needed better random IO performance. Similar to the VelociRaptor's appeal as a standalone hard drive, the My Book VelociRaptor Duo really targets a very specific niche. I suspect if you're a part of that niche, then you already know whether or not the VR Duo is right for you. For everyone else, there are more balanced options available.