After nearly two months since Google launched their Docs and Sheets applications on iOS and Android they have finally released the long promised Slides application for creating slideshow presentations. The applications promise to offer a well featured app for creating presentations with proper support for importing documents in Microsoft's PowerPoint format. 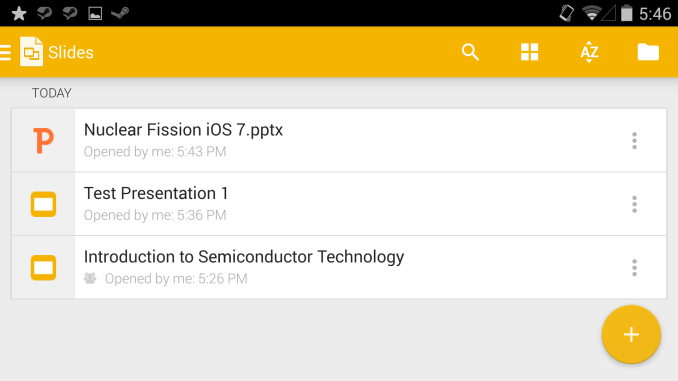 The first thing you see upon opening the app is a list of all presentations you have stored in your Google Drive account. The app looks very much like the preview of the updated Gmail application shown at Google IO with the circular button for creating files at the bottom and a drawer that slides in from the left containing most of the options for navigating around the application. In portrait mode the three dot overflow menu is still present to give options for viewing as a grid and sorting by name or date. When in landscape mode these options are exposed in the navigation bar at the top of the application. 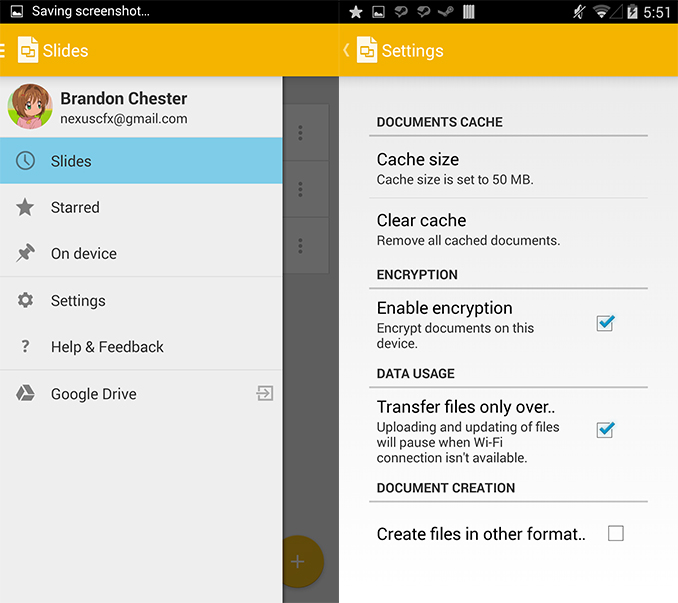 From the settings menu you can change the size of the on-device cache allowed for storing files, and can clear the cache entirely. Encryption of documents can also be enabled, and a setting allows files to only be synced when connected to WiFi to avoid those on a limited data plan using up all their data. Lets take a look at importing and playing a file created in PowerPoint. On the desktop it looks like Google is still having some issues. Upon opening the PowerPoint file I imported I was greeted with the following image which is displayed alongside the appearance in PowerPoint 2010 for reference.

Microsoft PowerPoint on the left, Google Slides in Google Chrome on the right

Obviously Google still has some work to do with Slides for web. Thankfully the experience is a bit better on mobile with the PowerPoint opening fine with all the visible formatting intact. 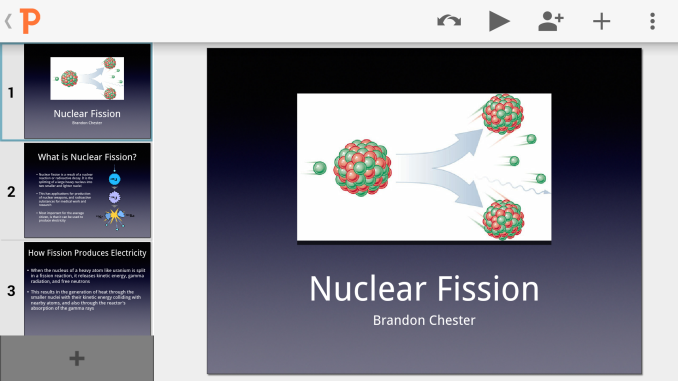 In terms of design the app looks very nice. At the top there's a list of actions that can be performed within the app. The icon with two arrows facing different directions is the undo/redo option, the triangle is the button to begin the slideshow, the icon with the person and the plus symbol is for document sharing, and the plus symbol alone is for bringing up the menu to insert images, text boxes, and shapes. On the left there's the list of all the slides in the slideshow and the plus button at the bottom is to create a new slide. The application also matches the new slides to the theme of the slideshow which is something I have found problematic with Apple's mobile Keynote application. My one complaint is that the scrolling of the list of slides is drastically below 30fps on my HTC One M7 Google Play Edition. 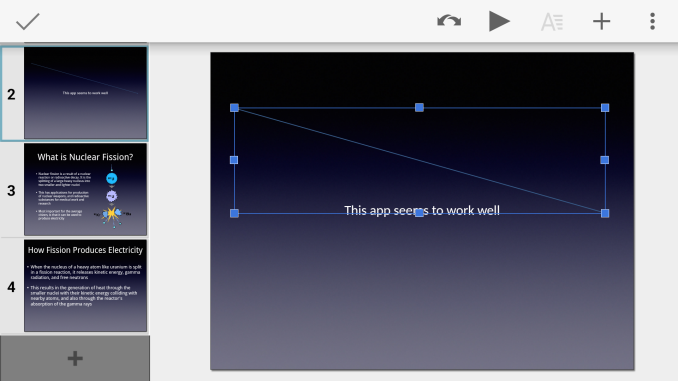 When adding images, text boxes, and objects the app creates a box around them to transform the size and scale as required. When the object is where you desire it to be you touch the checkmark in the top left corner which removes the transform controls and keeps the image in place until it is touched again. At this point I was happy overall with the new application but I had spoken too soon when I stated that the app seemed to be working well with the imported PowerPoint file. 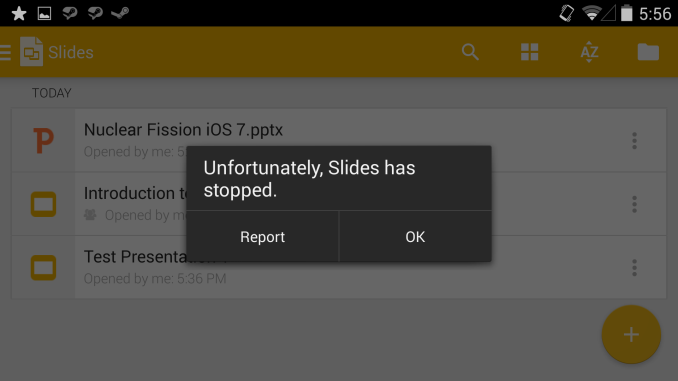 Upon trying to play the file the editor crashed and sent me back to my list of documents. It's clear that Google still has some work to do in making the app completely compatible with Microsoft Office files. After using the app's built in feature to convert the slideshow to the Google Slides format it played properly and there were no issues with formatting after doing the conversion which is more than can be said for converting certain PowerPoint files to Apple's Keynote format and vice versa.

Google's office suite is shaping up to be a powerful alternative to traditional tools like Microsoft Office. While Google still has work to do, they've created tools that all have a unified design across many different platforms and devices. Google Slides is available at the very least in the United States and in Canada from Google Play. Google is known to do staged rollouts for updates and new applications so it may take some time before it is available throughout the world.