One of ARM’s most tangible business advantages is its offer of both CPUs and GPUs to SoC designers. Anyone with experience in business to business relationships knows just how complex forming and maintaining a mutually beneficial collaboration can be. Setting up contracts, forming rapport, defining goals, and even just understanding documentation and technical content formatting all takes time. Unless there is significant benefit to investing in two different relationships and technologies, it is simpler (read: cheaper) to single source contributing components of a design. There are down sides of single sourcing (see Boeing 787 battery fiasco), but depending on a business’ capacity for risk, the savings are undeniable. Especially when ARM undoubtedly offers bundle pricing promotions.

When Imagination Technologies acquired MIPS Technologies in 2012 for $100 million, their goal was very clear – attack ARM. Imagination’s GPU business was already wildly successful, with design wins in a bevy of high end mobile devices including those from Samsung and Apple. Adding the CPU cores from MIPS, with their decades of history designing and licensing IP, strategically positioned Imagination opposite ARM’s licensing business. Imagination’s executives have also stated they are prepared to offer aggressive IP bundling discounts.

Looking at Imagination’s product, press, demos, and interviews, it appears they are not (yet?) positioning MIPS cores to combat ARM cores at the high end of the market. Rather, they appear focused on being a viable alternative to ARM in multi-threaded and low power workloads. In fact, the vast majority of MIPS cores are currently used in network infrastructure where threading and power efficiency are paramount.

Today MIPS is announcing a major launch: the Warrior I6400 core. Based on the 64-bit MIPS64 instruction set (release 6), the Warrior I6400 core is the middle-class CPU core in a family of three, each targeting a different point in the power/performance curve. Imagination is releasing the I6400 core last, which is at the middle of the pack balancing performance with power. Imagination has already released their high-end P56xx series and low-end M51xx series. 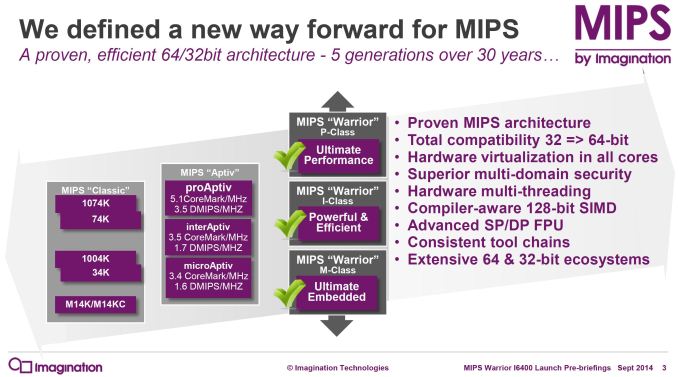 The most analogous ARM core to the I6400 appears to be the ARM Cortex-A53, but I6400 has some interesting features we haven’t seen in this market before and MIPS estimates it will deliver higher performance. I’ve produced a table here to help put performance in context. Note that only A57, A53, P5600, and I6400 are 64-bit processors.

While no one can accurately predict if Imagination will grab additional market share away from ARM, we can educate ourselves on this alternative before it potentially arrives in our hands and homes. And besides, competition is always a good thing.