IDF 2014: Where is Thunderbolt Headed? 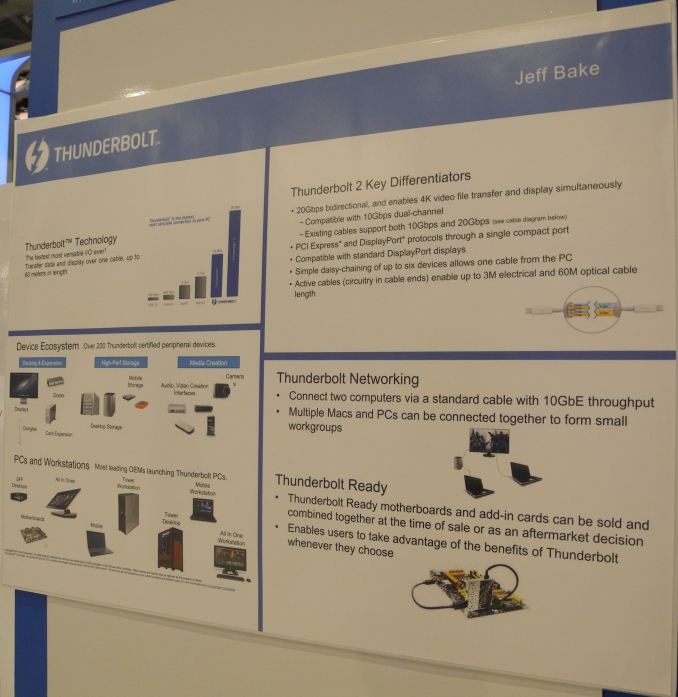 Coverage of Thunderbolt devices has been expanded on our site over the last few months. At IDF, we took the opportunity to chat with Intel about where Thunderbolt was headed.

The current market perception is one of Thunderbolt being relevant only to Mac users. But, a look at the products that Intel showcases, indicate that there are plenty of PC components (motherboards as well as workstations) that come with the technology integrated. Thunderbolt users on Windows have traditionally found that the technology doesn't live up to its advertised potential. Common complaints include

These issues have turned out to be a vicious circle - Mac users end up getting targeted with more Thunderbolt peripherals (for example, storage manufacturers pre-format their devices in HFS+ format), and this, in turn, lowers the appeal of these devices to Windows users. Irrespective of one's personal preference, it is an undeniable fact that Windows still rules the desktop and notebook market by a big margin. Without extensive adoption on the PC side, there is no doubt that Thunderbolt would go the way of FireWire, a technology that slowly faded into oblivion because Apple was the only vendor who invested in promoting it.

In the process of migrating from the Z77 / Z87 to the Z97 chipset, Intel tried to drive up Thunderbolt adoption by allowing motherboard makers to provide support via an add-in card. This kept the price of the motherboard low by avoiding the cost of integrating and verifying the Thunderbolt ASIC. The board layout only had to support a Thunderbolt header. The routing of the Display Port was also done externally.

Only interested consumers needed to pay the premium for the interface. In their motherboard segmentation plans for Thunderbolt, Intel intended these Add-In Cards (AICs) only for the X79 and H87 / H97 / Q87 chipsets. Z87 and Z97 motherboards were supposed to have Thunderbolt silicon on board. Unfortunately for Intel, many motherboard makers (including Asus) decided that the add-on card would be the best way to go forward, and didn't release any Z97 boards with integrated Thunderbolt support. This meant that the DIY market, for the most part, completely ignored Thunderbolt.

Thunderbolt on PCs: A Crippled Experience

The reason for the far from optimal experience with Thunderbolt on PCs boils down to two different aspects, the hardware and the software. In terms of hardware, Intel has never allowed motherboard vendors to hang the Thunderbolt silicon / add-in card off the CPU's PCIe lanes. These have to hang off the platform controller hub (PCH). On the other hand, Apple was allowed to hook up the Thunderbolt silicon directly to the CPU. The reason behind this leads us to the software side of things.

Apple has full control over the operating system. Hanging Thunderbolt peripherals directly off the CPU's PCIe lanes requires extensive support from the operating system, particularly when it comes to hot plugging devices and/or waking up peripherals from sleep mode. Over the PCIe lanes off the PCH, Intel has more control via its chipset drivers. Ultimately, it looks like Microsoft dropped the ball and Intel decided to come up with a certification solution by only allowing Thunderbolt silicon to talk to the PCH for all PC boards.

While Microsoft continues to twiddle its thumbs, Intel has decided to come up with less restrictive hardware suggestions to bridge the Thunderbolt experience gap between Macs and PCs.

The X99 platform's Thunderbolt capabilities were barely touched upon in the initial Haswell-E reviews. Part of the problem was that none of the motherboards from major vendors had support with on-board silicon. However, it is actually a very important chipset launch for the Thunderbolt on PCs ecosystem because Intel has finally allowed the AICs to hang off the CPU's PCIe lanes. A restriction is that the AIC must have support for a switch to disable the sleep mode for all the Thunderbolt devices in the chain, though this could conceivably go away if Microsoft fixes Windows for this issue.

In terms of updates to Thunderbolt itself, we are yet to see a move to PCIe 3.0. However, the drivers have been updated to enable 'Thunderbolt Networking'. This involves linking multiple PCs / Macs with Thunderbolt cables. A 10 Gbps network is automatically created (in the form of a 'dummy' network adapter). Macs and PCs can talk with each other to share printers and folders. For small workgroups, this could be an effective way to achieve 10 Gbps networking without the costly and noisy switches.

In conclusion, Thunderbolt is making great progress and PC users can expect things to get better in the future. In addition to Apple, lots of other vendors are also throwing in support for Thunderbolt in their workstations and notebooks. It would have been great to have a new version of Thunderbolt with PCIe 3.0 along with the X99 launch. But, we already know it is not going to be the case till Skylake launches. That said, it will be a priority for Intel and Microsoft to get the performance and experience right with current silicon for now.