HP Splits In Half: Consumer & Enterprise Businesses To Separate 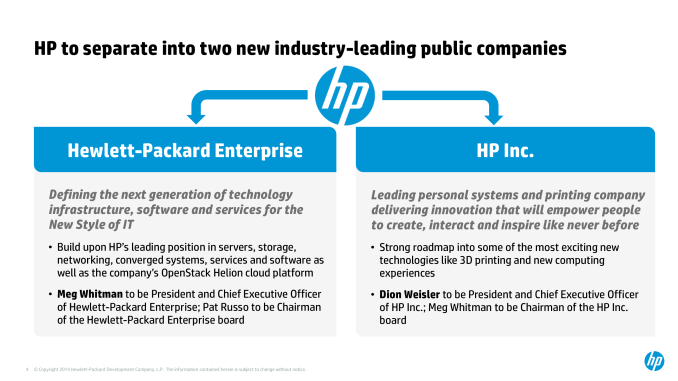 After a weekend of rumors spurred on by a Wall Street Journal report, HP has confirmed this morning that the company intends to split in half next year. The process will see each half become its own independent company, allowing for what amounts to HP’s enterprise and consumer divisions to go their separate ways. By doing so, HP is looking to allow each half to focus on one subset of HP’s overall business, allowing for more focused execution and growth while cutting the bonds that HP believes have made them slow to move in the past.

The split will see HP’s core businesses assigned into one of two companies. HP Inc. the closest of the two companies to an immediate successor to the current HP, will take HP’s PC and printing businesses, along with HP’s other consumer/mobile businesses such as the company’s Chromebooks and tablets. Internally these products are already organized under HP’s Printing and Personal Systems business, so in some senses this is merely moving a business that was its own division into its own company entirely. This split off will also see the current EVP of the Printing and Personal Systems business, Dion Weisler, promoted to CEO of the new HP Inc. Finally, HP Inc. will also be retaining the current HP branding. 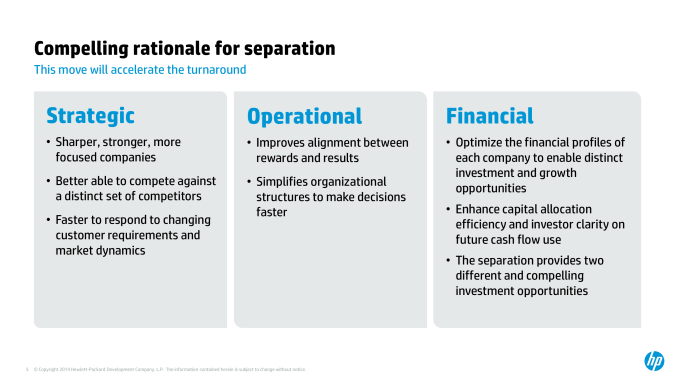 HP’s separation in turn is largely borne out of the fact that HP isn’t deriving much of an advantage of keeping all of their businesses under one roof together. HP believes that having the companies split off will mean that each company is better focused on its respective market without the heavy overhead of trying to manage all of these businesses as a single company. In other words, each half will be more flexible/agile than the combined whole. Practically speaking HP has seemed conflicted between consumer and enterprise for some number of years now, and while it’s possible to do both things at once it’s anything but easy. So in lieu of a better reason to have a single company, HP seems content to let each half of the company go their own ways. 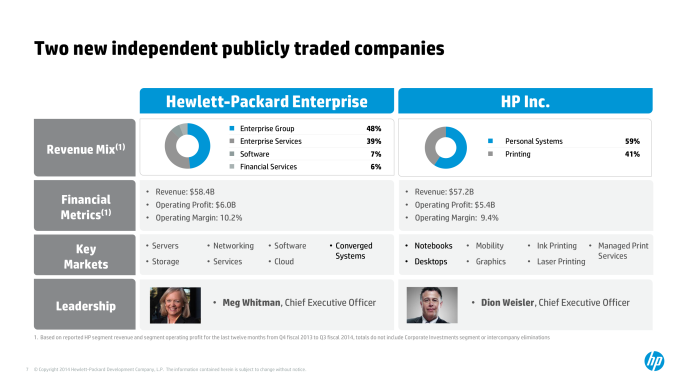 Ultimately HP expects the transaction to be completed by the end of the company’s fiscal year 2015 (Oct. 31, 2015), assuming regulatory approval and no other challenges. This split comes as the latest step as part of the company’s larger 5 year turnaround plan, which if successful HP will be nearing the end of.

Finally, in light of this split it’s interesting to reflect on the state of HP after such a long period of acquisitions and mergers by the company. Over the years HP has acquired a large number of formerly high profile companies, including Digital Equipment Corporation (DEC), Compaq, VoodooPC, Palm, 3Com, and Electronic Data Systems (EDS) as part of a larger effort to build up what has become the megalith that they are now taking apart. The combined companies are still larger than the individual companies HP has acquired over the years, but between the previous spin-off of Agilent (HP’s former instruments & equipment business) and now the split into HP Inc. and Hewlett-Packard Enterprise, the individual companies are no longer the sort of mixed business conglomerates that HP has been for the last two decades. 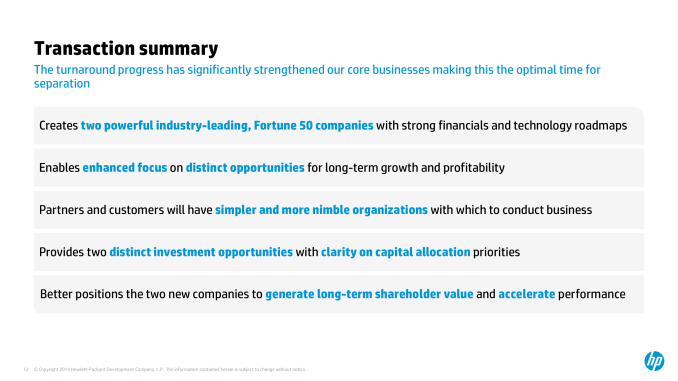