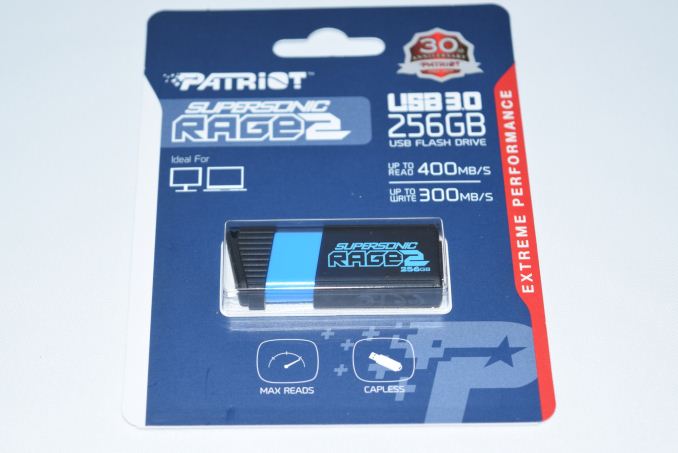 The rise of USB 3.0 as a high speed interface for PCs and the increasing affordability of flash memory has led to some very interesting products. USB flash drives are a dime a dozen, but there is scope for manufacturers to differentiate themselves. High-performance flash drives have traditionally employed a SATA SSD controller behind a USB 3.0 - SATA bridge. However, this increases the drive cost in what is essentially a price-sensitive market. Controller vendors have recently started to introduce native high-performance USB 3.0 flash controllers. Today, we will be looking at the performance of the Patriot Supersonic Rage 2 256GB, a high-end USB 3.0 flash drive sporting a recently introduced native USB 3.0 flash controller.

The list of flash drives used for comparison purposes in this review is provided below.

In terms of external design and features, the Patriot Supersonic Rage 2 doesn't depart from the older members in its lineup. It still features a retractable USB connector, allowing for a compact design. There is also no need for an  explicit cap on the USB connector. The design also supports hanging the flash drive off a keychain. As we can see from the photograph below, the Supersonic Rage 2 256GB is the smallest flash drive that we have evaluated in its capacity class. 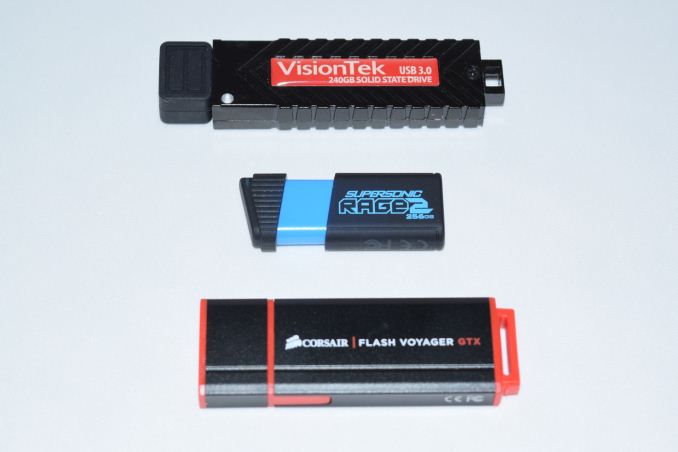 Without opening up the unit, it is possible to identify the controller and flash inside the unit. 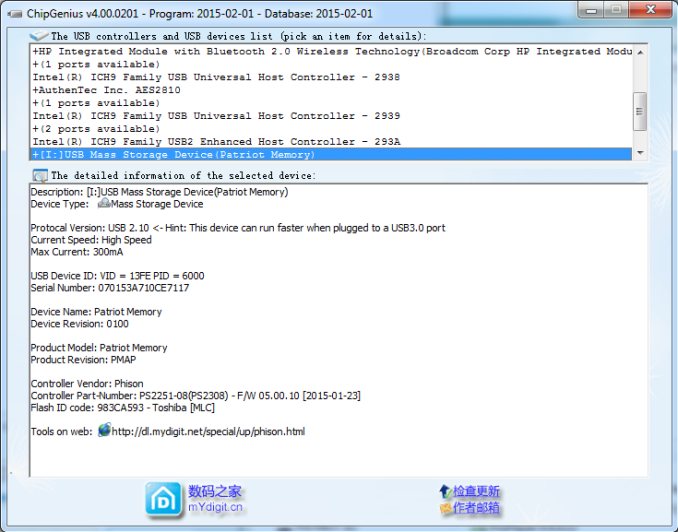 We see that the Supersonic Rage 2 uses the Phison PS2251-08 controller with firmware version 5.00.10. The controller was introduced at CES earlier this year. The drive uses Toshiba MLC NAND.

Evaluation of DAS units on Windows is done with the testbed outlined in the table below. For devices with USB 3.0 connections (such as the Patriot Supersonic Rage 2 that we are considering today), we utilize the USB 3.0 port directly hanging off the PCH. This port supports UASP, even though the drive we are considering today doesn't advertise support for it.

The full details of the reasoning behind choosing the above build components can be found here.

Patriot claims read and write speeds of 400 MBps and 300 MBps respectively. These might be achievable in specific benchmark modes with appropriate queue depths, but they are not backed up by the ATTO benchmarks provided below. That said, these access traces are not very common in real-life scenarios. 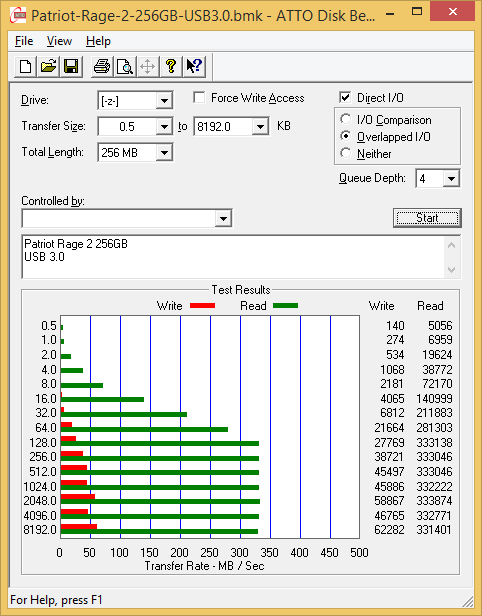 CrystalDiskMark, despite being a canned benchmark, provides a better estimate of the performance range with a selected set of numbers. As evident from the screenshot below, the performance can dip to the KBps range for 4K random acceses. 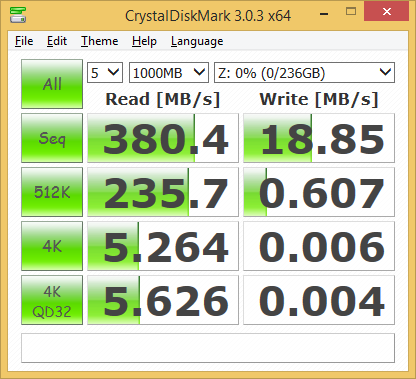 Our testing methodology for DAS units also takes into consideration the usual use-case for such devices. The most common usage scenario is transfer of large amounts of photos and videos to and from the unit. The minor usage scenario is importing files directly off the DAS into a multimedia editing program such as Adobe Photoshop.

In order to tackle the first use-case, we created three test folders with the following characteristics:

In the above use-cases, the Supersonic Rage 2 manages to handle itself very well. It comes out on top in the majority of the benchmarks.

For the second use-case, we take advantage of PC Mark 8's storage bench. The storage workload involves games as well as multimedia editing applications. The command line version allows us to cherry-pick storage traces to run on a target drive. We chose the following traces.

Usually, PC Mark 8 reports time to complete the trace, but the detailed log report has the read and write bandwidth figures which we present in our performance graphs. Note that the bandwidth number reported in the results don't involve idle time compression. Results might appear low, but that is part of the workload characteristic. Note that the same testbed is being used for all DAS units. Therefore, comparing the numbers for each trace should be possible across different DAS units.

Units sporting a SATA SSD controller tend to perform very well in this benchmark. Drives such as the Supersonic Rage 2 do not target the market for portable SSDs.

Yet another interesting aspect of these types of units is performance consistency. Aspects that may influence this include thermal throttling and firmware caps on access rates to avoid overheating or other similar scenarios. This aspect is an important one, as the last thing that users want to see when copying over, say, 100 GB of data to the flash drive, is the transfer rate going to USB 2.0 speeds. In order to identify whether the drive under test suffers from this problem, we instrumented our robocopy DAS benchmark suite to record the flash drive's read and write transfer rates while the robocopy process took place in the background. For supported drives, we also recorded the internal temperature of the drive during the process (unfortunately, not for the Supersonic Rage 2). The graphs below show the speeds observed during our real-world DAS suite processing. The first three sets of writes and reads correspond to the photos suite. A small gap (for the transfer of the videos suite from the primary drive to the RAM drive) is followed by three sets for the next data set. Another small RAM-drive transfer gap is followed by three sets for the Blu-ray folder.

An important point to note here is that each of the first three blue and green areas correspond to 15.6 GB of writes and reads respectively. Throttling, if any, is apparent within the processing of the photos suite itself. 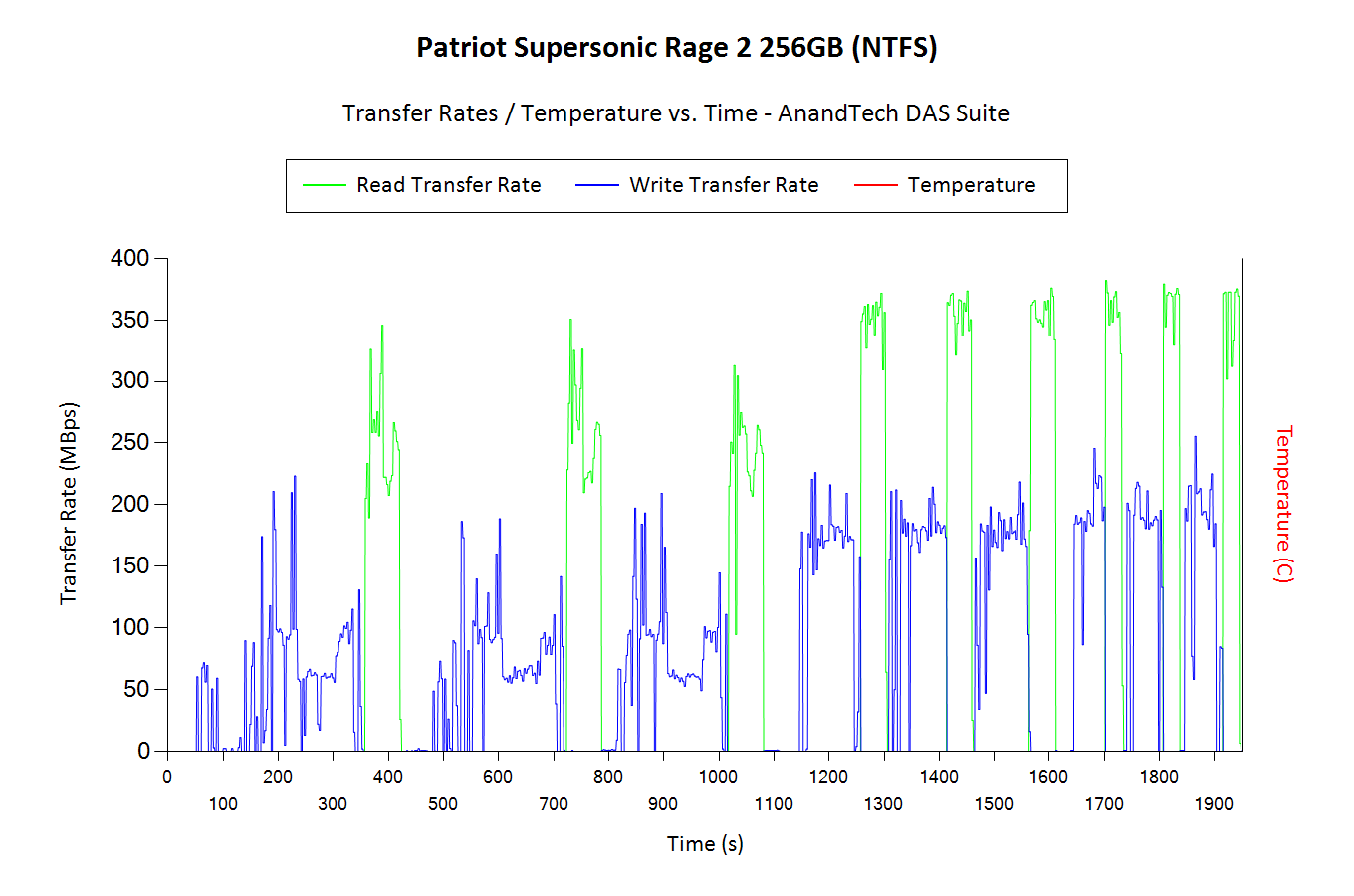 We find that the unit doesn't suffer from any throttling issues, with transfer rates being quite consistent after the initial startup phase.

Coming to the business end of the review, the Supersonic Rage 2 continues Patriot's tradition of improving the performance of their USB 3.0 flash drive every year. This time around, they have been helped by Phison's new high-performance native USB 3.0 flash controller. While SATA SSD controllers enable features such as TRIM and over-provisioning control (such as what we saw in the Corsair Voyager GTX), they are not user-controllable in devices with native USB 3.0 controllers.

A typical 256 GB SSD in a 2.5" bus-powered USB 3.0 enclosure retails for around $125. The Patriot Supersonic Rage 2 256GB has a current street price of $190 on Amazon. The form factor of the USB drive carries a premium. Compared to flash drives in its capacity class, the Rage 2 is cheaper than the Corsair Voyager GTX, thanks to doing away with the USB 3.0 - SATA bridge. However, it is priced higher than the VisionTek Pocket SSD based on a SandForce SF-2281 SATA SSD controller. Then, again, the Rage 2 doesn't suffer from the thermal throttling issues that plague the VisionTek unit.

Ultimately what we find is that the Supersonic Rage 2 makes for a great flash drive (decent write speeds and very fast reads for large-sized files, but mediocre random access speeds). It is also the smallest and most compact 256GB flash drive that we have evaluated so far. That said, users should not mistake it for a portable SSD, and to Patriot's credit, they don't advertise it as one.