For users in the UK, OverclockersUK is one of the major e-tailers for computer components.  In a country where off-the-shelf components are almost non-existent except from a few independent stores, we have to go online to get our fill.  Today, OverclockersUK invited media the the launch of their new pre-built enthusiast systems.  These systems are built to be some of the the world’s fastest systems, and are co-authored with their in-house overclocker and UK #1, 8Pack.

The flagship of the new systems will be called the SuperNova: an i7-3930K clocked at 4.9 GHz, water cooled, featuring three GTX Titans overclocked to 1200/1700 and water cooled all in a dual loop: 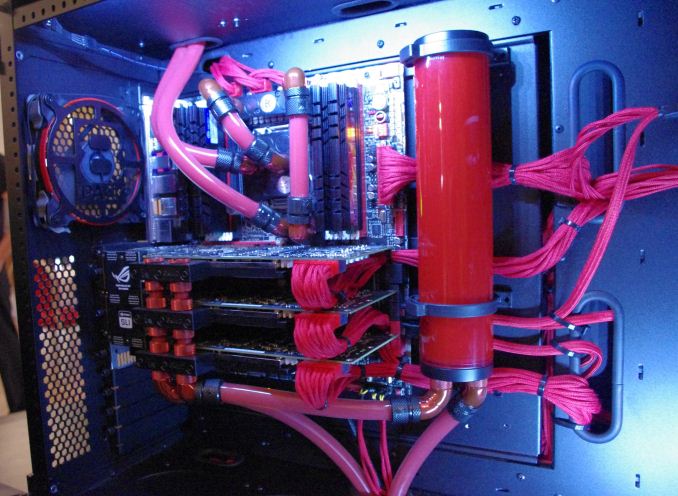 Obviously such a system comes with a price tag to match - £9500 after VAT (ca. $12500).  OCUK will offer some customization options, and the system will be rated for a Fire Strike Extreme score of 13500 with every component still stable.

The purpose of these systems is all in the pre-testing.  8Pack personally tests dozens of CPUs for each system, to find the ones with good speed-voltage characteristics.

For example, the high end Haswell system being launched today is the Hypercube, and takes the highest bin processor, the i7-4770K with a base speed of 3.5 GHz, all the way up to at least 4.9 GHz at a lowly 1.3 volts.  As an overclocker, this is an insane target.  8Pack has mentioned how in the first batch of 150 CPUs he tested, only six to eight hit 4.9 GHz at that voltage target, and two of those go to 5.0 GHz at the same voltage.  The Hypercube will also hold three overclocked GTX 780s in a Gigabyte Z87X-OC Force motherboard. 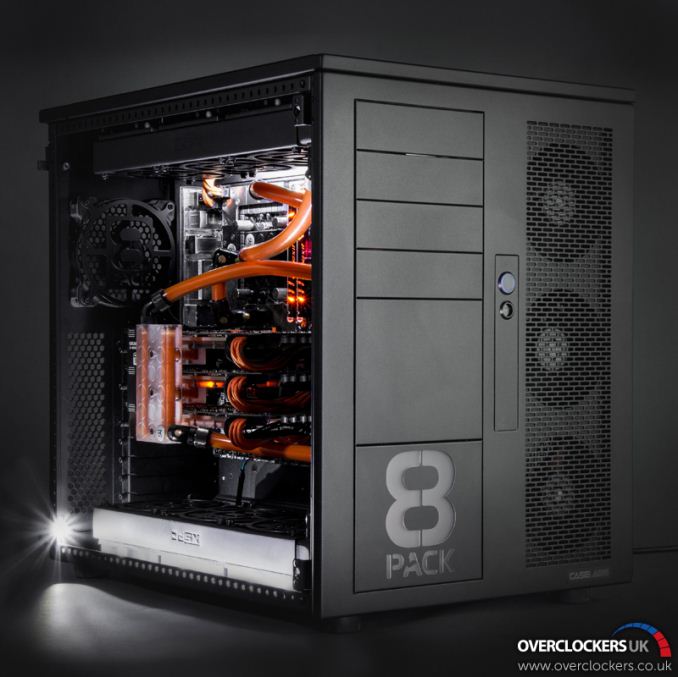 As an overclocker, I appreciate the fact that testing lots of CPUs (a process we call binning) to find ones that hit a target is a time-consuming endeavor, as well as immensely expensive if you end up having to perform it personally without any form of corporate sponsorship.  In order to claim to sell the ‘World’s Fastest Systems’, a lot of that binning has to take place to get the right hardware and still provide it, as a System Integrator, with a guarantee.  This is why the systems come at such a price.

Part of the platinum treatment these systems get, OCUK will professionally photograph the system ordered and place it as the high resolution background for the system installed.  Each system will be shipped by a specialist two man courier team who will unpack the system from its flight case (!) and set it up.  If for any reason the system needs to be returned, the same courier will package the system up to take it back to OCUK.  Included in the price is a two year warranty and a special customized certificate showing 8Pack’s testing and benchmark scores achieved with that exact system.  The pack will also contain 8Pack’s business card for direct contact to the man himself, and OCUK will offer an upgrade service such that users can update to the latest GPU/CPU with no labor charges. 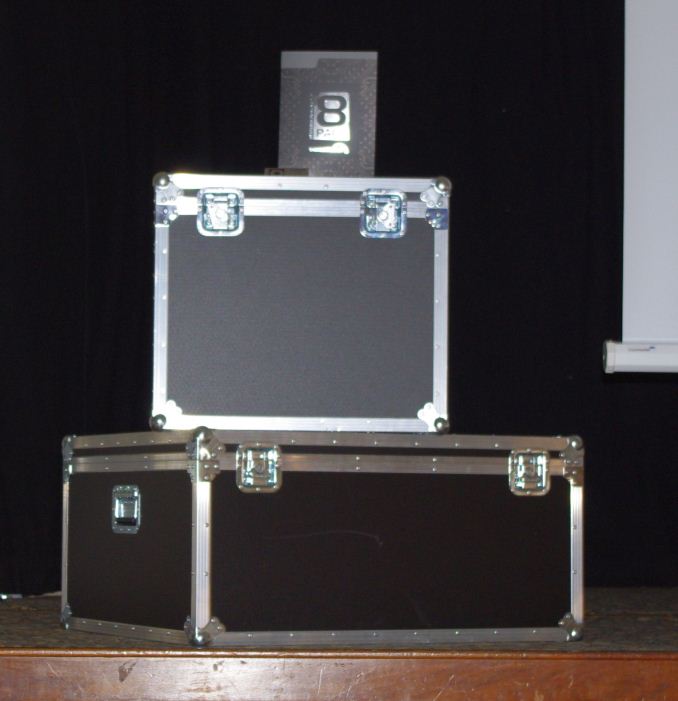 So, for the 98% of CPUs which do not hit the grade, what happens then?  These are funneled through to OCUKs other pre-built systems which do not require such demanding speed, or sold on as pre-opened stock.

The final system being launched is the Polaris, using an Ivy Bridge i7-3770K CPU to 5.0 GHz and 16 GB of 2400 C9 Corsair Dominator Platinum memory.  This memory has specific Samsung ICs for high efficiencies, and OCUK are aiming the Polaris at high resolution setups for when a user must have a Multi-monitor / >4K arrangement.  As such, the system comes with two overclocked and water cooled GTX Titans, running at 1200/1700.

Both the Polaris and the Supernova will feature a complete USB Fan controller package that allows users to control the fans either by the panel and the software.  Due to the amount of radiators and Scythe GT fans being used, 8Pack was adamant that in all situations only 50% fan speed should be needed to keep the systems cool.

So I enjoy a nicely modified system, and pricing the high performance end of these pre-built systems near the range of brand new cars is a bold move for OCUK – they know they are not going to sell many, but this helps in the custom nature of such a system.  I managed to get a quick word with the man himself for a few questions.